May 17th, 2012 - 06:32pm
By James Nouch, Staff Writer
Two thirds of mobile gamers keep up their habit to quell boredom and have fun according to MocoSpace's latest 'Y U Play?' survey.

34 percent of the 10,000 mobile gamers on MocoSpace's platform who were surveyed said they played games for fun and 32 percent said they did it because they wanted to kill time.

The remaining 34 percent said they played mobile games to compete, meet new people, connect with family and friends, and even flirt.

Not so hot for teacher

The classroom is also proving to be a gaming hotspot with 31 percent of those surveyed admitting to playing games during school.

When asked why, 42 percent said it was because they found classes boring while 41 percent said they would play mobile games when they had some downtime. 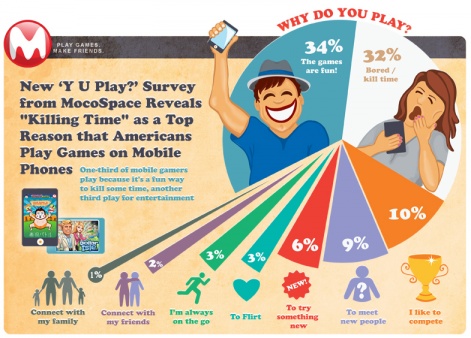 MocoSpace also found that 55 percent of its active users were playing games on its network accounting from more than one million hours of gaming clocked daily.

"This survey showed us that our gamers are really engaged with the titles we are offering," said MocoSpace co-founder and CEO Justin Siegel.

"We are working on developing more games in-house as well as fostering relationships with third-party developers in order to churn out more fun HTML5 games that can be played on any mobile device."

Huawei approved for 5G across the UK in restricted capacity