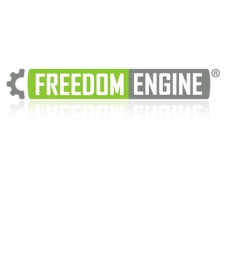 September 3rd, 2012 - 07:14pm
By Keith Andrew
Into the increasingly competitive game engine market comes a new player, with those behind DarkBASIC  The Game Creators - launching a new startup designed to support studios with limited financial resources.

Called Freedom Engine, the new toolkit will launch in beta form on 12 September and is set to play a starring role at 2012's Intel Developer Forum in San Francisco from the following day.

"There are literally millions of passionate game developers all around the world yearning for a way to bring their ideas to life," said CEO Lee Bamber.

"Freedom Engine offers everyone, regardless of their financial resources, an opportunity to create and deploy the fantastic concepts theyve been dreaming up and share them across social media.

"In particular, we want to give indie and hobbyist developers the deployment resources theyve always felt were out of their reach."

Indeed, when it comes to Freedom Engine's feature set, it appears competing with the likes of Unreal or Unity isn't a priority.

It's been confirmed the engine won't launch with 3D physics support  set to be "added at a later date" - but sprites, sound effects, music, collision detection and 3D commands will all be on board from day one, enabling studios to create "fully immersive games."

Simplicity appears to being pitched as Freedom Engine's unique selling point, however, with developers able to code from within WebGL-enabled browsers, previewing in a separate window.

The games that result can then be deployed across Android, iOS, Windows and Mac - though HTML5 is to be the only supported platform during the beta.

In particular, those behind Freedom Engine say particular attention is being paid to Microsoft's forthcoming Windows 8, with studios able to make full use of multi-touch touchscreens  support that likely explains the forthcoming Intel link up, in view of the latter firm's Ultrabook range.

"We truly believe Freedom Engine has the potential to change the way games are developed today, and we cant wait to share this concept with the broader development community," concluded Bamber.

Developers will be able to launch games from within Freedom Engine without charge, with 10MB of storage included for free as standard. 250MB of storage, however, will cost $5 a month.

More details can be found on the Freedom Engine website. Reply
Scarlet Smith
Thanks for sharing the information about android game creator as this is really helpful in creating games and features.
Posted 8 years, 7 months ago