At the start of 2012, the company had been planning to hit breakeven by the year's, at least in terms of adjusted EBITDA. Instead, during Q4, it recorded an adjusted EBITDA loss of $1.8 million.

"The fourth quarter came in at the high end of expectations across our key metrics," argued CEO Niccolo de Masi.

"Consistent with our guidance, smartphone revenue was flat compared to Q3 due to the decision to delay the global launch of approximately half of our Q4 2012 titles. We anticipate seeing momentum accelerate as new titles launch incorporating our new monetisation systems."

During the fourth quarter (October to December), GAAP revenue was $21 million, up 38 percent year-on-year. 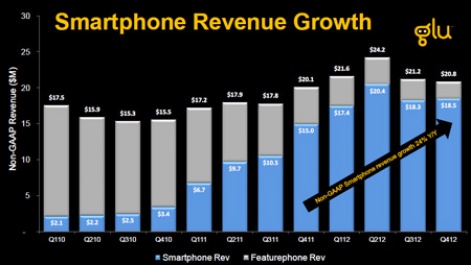 "We had a solid fourth quarter performance with non-GAAP smartphone revenue growing primarily due to the strength of two of our new sequels Contract Killer 2 and Eternity Warriors 2," stated CFO Eric R. Ludwig.

"While we expect first quarter results to be impacted by a combination of seasonality and further delays in title launches, we remain in position to benefit from increasing monetisation trends as we implement our new strategy.

"Given our on-going commitment to control costs, we are confident in our ability to end 2013 with approximately $14 million in cash and without the need to raise additional capital or incur debt," he added.