96% of iOS revenue is from 6 month old top earners

Immersyve on the struggle to break through 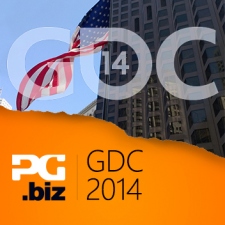 "Developers often think that if they make the next Titanfall or Call of Dutystyle shooter on mobile or tablets, it's going to 'blow the market wide open'," offered Scott Rigby of Immersyve during the firm's talk at GDC 2014 in San Francisco.

"That's what we call the wrong way of thinking. Games like that don't fit in with the opportunities mobile presents."

According to engagement specialist Immersyve, breaking into the mobile market is harder than even the most pessimistic of developers think. But one of the main reasons it's so hard is because scores of developers aren't thinking about why and how people play mobile games in the first place.

"I very much doubt any of you in this room are playing Titanfall right now - well, I'd be very impressive if anyone was. Aside from the fact that it's not possible on a technical level, if any of you were playing that, I'd notice," he continued.

"Hard as it is for me to admit, however, chances are there are people in this room right now who are playing a mobile game. You can play a mobile games in 10 seconds  bam. Chances are, I wouldn't notice."

Immersyve's main message, therefore, is that developers need to stop trying to take on console with mobile  it's not that console games aren't technically possible on high end mobile handsets. Rather, they simply don't fit in with the way people want to use those devices.

"People will say to me, "well, that's just because no-one has executed a good console game on mobile yet," added Rigby.

"That's just not true. Call of Duty: Strike Team came out last September  it got great reviews. That's a win, right? Well, Strike Team has made less than $2 million in lifetime revenue."

Indeed, first-person shooters as a whole generate less than 2 percent of mobile revenue, with only 4 percent of gamers having ever taken any of them on.

The end result of all this is, for the developers that understand how and where mobile gamers are playing games, the opportunity is huge.

"There are 9,000 new apps on the App Store each month," added Immersyve's Troy Skinner.

"That's not an especially shocking fact, right? But, slightly more surprising is the fact that 96 percent of iOS revenue comes from games that were top earners six months ago. It's a myth that new games are busting to the top."

More worrying, however, is the impact mobile  and particularly free-to-play  is having on the type of people that are playing games.

We're all used to the notion that free-to-play has opened up gaming to new audiences, Skinner said, but perhaps we don't truly appreciate how it is alienating people who have been playing games for all their lives.

"Free-to-play is converting players who were very used to paying into customers who don't want to pay," he added. "It's like what happened to the music industry. As soon as people could get music for free online, there was no coming back from that."

Skinner's point was that the top grossing games are increasingly reliant on new, casual gamers to keep their revenue ticking over. Core gamers are intentionally shunning free games on mobile  they may download them, but they're actively deciding not to spend.

"Core gamers also don't educate themselves on new games on mobile, which is the complete opposite of how educated they were on console," he continued, noting that the traditional model for game discovery  building in a unique feature into your game and then pushing it in the PR for press coverage  no longer works.

More people will download a game because they like the look of the icon than because they've read a positive review online.

The solution, therefore, is to understand that mobile gamers want games that "fit into the gaps where they're waiting for things to happen" in their daily lives, rather than ones they have to dedicate themselves to and fully immerse themselves in.

"There are actually very few pockets of time that align with traditional gaming habits," Rigby chipped in.

"Mobile is a fantastic opportunity to fit into these slots. What mobile allows for is creating more satisfaction density across the day, but games have to have certain values to fit in with this.

"There's just no point in applying the traditional ruleset of console gaming to mobile. Gamers don't want intensity on their devices - that's going to impact how often they choose to engage with your game across the span of their day."

The key lesson is, mobile gamers tend to have only one or two titles they take on regularly at one time and, crucially, they don't have set games for set time slots. If your game can't scale down to fit into a spare five minutes, they're going to stop playing it.