The talent behind CryptoKitties and CryptoWars, plus Super Game Chain, PlayTable and more 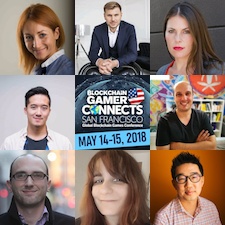 As blockchain gaming superstars go, they don’t come much bigger than Benny Giang - you know; the guy that kickstarted it all out of nowhere with the original and often-copied cryptocollectible, CryptoKitties.

Now you can thank him in person, because we’re purring with delight that he’s agreed to deliver a Superstar Session to open the second day Blockchain Gamer Connects San Francisco 2018 in association with Super Game Chain (May 14th to 15th). Giang will explain his experience of creating his breakout hit and explore the notion of tokens as gaming.

Just take care not to overindulge at the party the night before - no bowl of cream is a big enough reason to miss hearing from someone who has now secured his place in gaming history.

Crypto’s cool and we’re gamers at heart so that’s what we’re interested in; how the technology is going to change the way we play. Our series of GameMaker Sessions zeroes in on the groundbreaking work of pioneering developers as they wrestle blockchain into a shape that will engage gamers everywhere.

Matías Nisenson is CEO at Experimental, the studio behind CryptoWars, the first strategy game to fully run on smart contracts. In his seminar, Nisenson will not only share the history of the different versions the company has launched, but he’ll also disclose the versions that will be released in the run-up to a public release on the ethereum mainnet.

B2Expand’s Skyler Goldstein will walk his audience through the development of space strategy game, Beyond The Void. He’ll explain how the team approached designing a relevant user experience for crypto games and what lessons have been learned that will be of use to any blockchain games developer.

Similarly, EverdreamSoft Product Manager Nicolas Sierro, will draw back the veil on the development of the Swiss studio’s blockchain mobile trading card game Spells Of Genesis.

The GameMaker Sessions close out with an unmissable panel. We expect nothing less than a full house for Seismic Games’ John Linden as he takes to the stage for what is sure to be a hotly contested panel debate that asks the question that’s on everybody’s minds at the moment: are blockchain games, really games? You don’t want to miss this one!

Event co-hosts Super Game Chain aims to deliver a faster, more reliable and more scalable blockchain solution for gaming, having already achieved 4,000 transactions per second. Delegates will find out what this means for games first-hand in CEO and founder Tong Xu’s seminar.

Have you seen PlayTable? It’s pretty cool. Imagine a combo of a tablet with Amiibo powered by the blockchain and you get the idea. Jimmy Chen will let you know the inside story on what it takes to make the world's first blockchain gaming console.

And if you want to know the lay of the land for this rapidly evolving sector, Margaret Wallace, from research company M2 Insights, will deliver a data-driven seminar that explores the blockchain game landscape with the audience.

Fun with friends (or rivals)

Panel sessions are often some of our favourites because you never quite know whether everyone’s on the same page, or if you’re going to see some big names butt heads. Not that we’re suggesting any of our speakers are buttheads, you understand...

Let’s start on the smaller scale and join RAWG’s Dasha Lyalin and CryptoBazar’s Oleg Ivanov for an intimate fireside chat as they relive the budding relationship between their two companies.

But for the full panel debate experience, we need to move on to MachineWorks Northwest’s founder Andy Vasen, who will discuss the blockchain digital asset economy, while Decentraland’s Kieran Farr takes on using tokens to build a platform.

But that’s all about where we are today. Where will we be tomorrow? You might find the answers in a session that gazes into the future of blockchain and its use in games. You’ll hear from Seeds founder and CEO Rachel Cook, and Kevin Chou of StarCard amongst others as they forecast how blockchain will be used to innovate game design, community building/rewarding - and even what regulation might look like.

To find out more about our stellar speaker lineup, take a look at the first and second waves.

It’s a brand new event for 2018, where 40 of the sector’s biggest names will share their experience, insight and predictions covering everything from the Blockchain Basics to the latest ICO updates and future trends.

But there’s more to the event than the packed conference schedule, with networking opportunities everywhere you look, from the free Pitch & Match meeting organiser and Speedmatching developers with publishers to the Global Connects Party.

There’s also a live pitching roadshow, Indie Pitches, the Indie Showcase area - and that’s before you even think about the larger Pocket Gamer Connects conference. Your ticket gets you into both shows.

Where will you be on May 14th to 15th? We hope you’ll join us in San Francisco for the first ever Blockchain Gamer Connects. Book your ticket now!

Steve is an award-winning editor and copywriter with 20 years’ experience specialising in consumer technology and video games. He was part of a BAFTA nominated developer studio as project manager for the UK’s first fully interactive digital TV channel. In addition to editing TheVirtualReport.biz, Steve contributes to PocketGamer.biz, PCGamesInsider.biz and BlockchainGamer.biz, as well as creating marketing content for a range of SMEs and agencies.