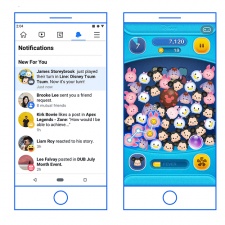 Facebook has unveiled a host of new features that are being rolled out to its Instant Games platform.

The company revealed the update at its annual conference F8 in San Francisco. As part of the social network’s redesign, players can access the games tab quicker through the use of shortcuts positioned at the top of the page.

New menus have been added to help players invite friends, turn on messages, share games and provide feedback to developers all while staying in their game session.

Groups focused on games can now organise tournaments where members have the chance to compete for weekly high scores. Facebook is working on a dedicated inbox for these notifications that will be made available in the future.

Contextual notifications are also available, which let users know once a player has taken their turn in a game or an in-game event is about to begin.

Despite the new additions, Facebook has temporarily halted reviews of new Instant Games while it investigates issues with the submission process.

Learn more from Facebook about Instant Games at Pocket Gamer Connects Seattle on May 13th and 14th.