Why IAPs beat ads on the App Store

April 30th, 2013 - 03:07pm
By Carter Dotson, Stateside columnist
Chicago-based Carter Dotson is a senior writer at 148Apps.com, which was acquired by PocketGamer.biz publisher Steel Media in 2012.

One can learn a lot of things from unicorns. For starters, there's hopes, dreams...and, of course, advice on the importance of monetisation and marketing.

Well, why not? Case in point: Robot Unicorn Attack 2's launch tells us a lot about why launching with massive marketing might behind you doesn't always deliver stacks of cash.

Consider how Robot Unicorn Attack 2 has managed to hang around at #2 in the free iPhone charts, having previously made a brief appearance at the top spot.

First off, it's a sequel to a very well-known Flash and iOS gaming brand, so there's built-in appeal. Secondly, the game received prominent promotion by Apple as the iPhone Editor's Choice at launch. What's more, it benefits from something that few other mobile games have in their arsenal: a TV advertising campaign.

Thanks to the backing of the Adult Swim TV network, Robot Unicorn Attack 2 regularly gets advertised during commercial breaks.

While the network has the attitude of the scrappy outsider, in reality it's actually one of the top-rated networks among the key 18-49 adults demographic in the US - though it's only on the air each day for 9 hours.

Yet, has this turned into overwhelming financial success for Robot Unicorn Attack 2, the studio's first big free-to-play iOS launch? Not exactly.

The game is currently sitting at #103 on the iPhone top grossing chart in the US, and #225 on iPad. Despite all the promotion and all the downloads, it's not making as much money as it could or should be. Why not?

Well, look at the monetisation. The critical consensus is that the free-to-play elements are generally unobtrusive. It's possible to play the game without worrying about spending all too much in game currency or ignoring it all together. 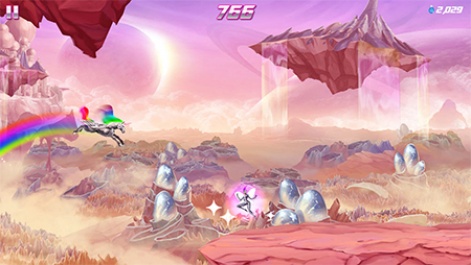 In fact, with the bevy of daily rewards and community goals that provide bundles of currency regularly, it's easy to not spend actual money for large portions of time.

The most popular in-app purchase in fact? Erasure's 1994 hit Always, known as the theme from the original game and available for 99c. Some currency packs make an appearance on the top IAP list too, but clearly when people are spending money, it's not a lot.

So what exactly does this prove?

Simply put, flashy promo spots on TV networks will not make a game successful. As such, if a studio that has the backing of a major TV network and major American media conglomerate can't muscle its way up the top grossing ranks, then what hope is there for everyone else?

In reality, those behind Robot Unicorn Attack 2 would have been better off convincing their prominent backers to pump their promo money into researching proper monetisation techniques.

It sounds obvious, but far too many developers treat monetisation as an afterthought  a dirty little extra that's tagged on at last minute almost out of shame.

Nevertheless, if a game isn't set up to make money, it stands to reason that only Temple Run-sized download numbers will give it a fighting chance at being a genuine success.

I should clarify, I'm not advocating that anyone turn their games into the kind of soulless money machines that seems to fuel the constant release of cards and slots games. Rather, there needs to be a balance found between drawing players, keeping them interested, and getting them to want to spend money.

Oh, and here's a scary thought: past success in this field is also no guarantee of future success.

Halfbrick's Fish Out of Water  the firm's new 99c release that disguises its monetisation rather neatly  is currently sitting in the lower of the top 200 grossing chart shortly after its launch. 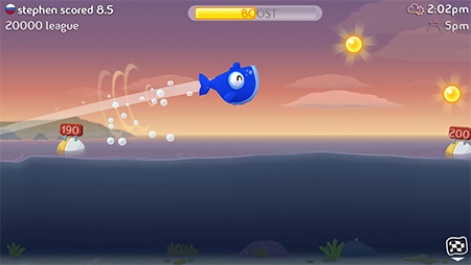 Fish Out of Water

Likewise, Nimble Quest from NimbleBit is barely hanging around the top 300 grossing a month after its debut, with the studio seemingly shifting focus already, pushing out footage of its new project.

Nevertheless, the beauty of the App Store is that there exist possibilities to tweak this model before or after the fact.

If Adult Swim Games had perhaps indulged a soft release in one or two countries to see how users responded to its monetisation set up, it could have tweaked it in time for a worldwide launch.

There's also the possibility of turning Robot Unicorn Attack 2 into a paid release, though it's worth noting this often doesn't work  it's a strategy that didn't work out long term for Punch Quest, whereas tweaking its monetisation as a free app did.

In short, the best strategy is to plan this all ahead of time to be ready at launch, which  for many games  remains the most crucial time period.

The other important thing to note is, all the developers cited here will be fine.

But, for studios that don't have this kind of evergreen revenue stream to rely on, nor the brand name recognition, the warning must be heeded: it's not just about getting games in people's hands - it's about getting the people's money once you're in there.