Generating over $2 million in a month in US alone

July 1st, 2013 - 10:31am
By Jon Jordan, Contributing Editor
As Kabam has happily announced, Fast & Furious 6: The Game is its fastest growing game of all time.

Within a month of its 16 May launch on iOS and Android, the free-to-play racer had racked up over 17 million installs.

Developed by the company's Exploding Barrel Games studio in Vancouver, the game only loosely uses the film licence; we can confirm it does contain at least one image of The Rock.

Graphically, it's topnotch and gameplay-wise the addition of drift sections into the drag races, combined with a story mode (loosely based on the film), provides slightly more narrative depth than we're previously seen in these games.

And these elements have certainly been reflected in the game's performance.

On Google Play, it's been top 10 top grossing in 24 countries.

It was also listed by market intelligence outfit Distimo as ranking #2 in terms of global free iOS apps in May.

It's significant to delve into why the game has performed better on iPhone than iPad. 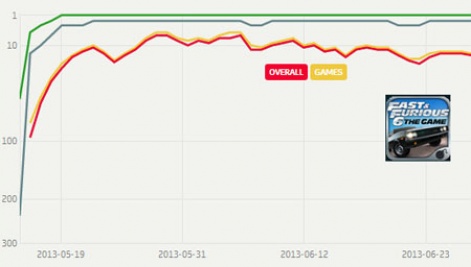 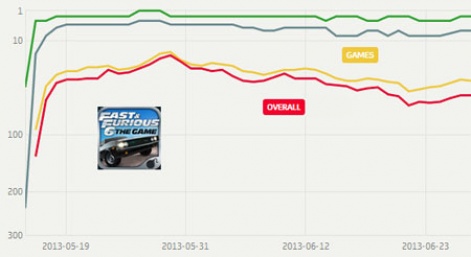 According to Distimo, during May, 68 percent of the estimated revenue was generated from iPhone, and 32 percent from iPad.

Geographically, the performance is similar across western markets such as the US, Germany and the UK. Of course, the US is the biggest single market.

As you can see from the following graph, Google Play revenue is increasing as a percentage of the total, as iOS revenue drops. 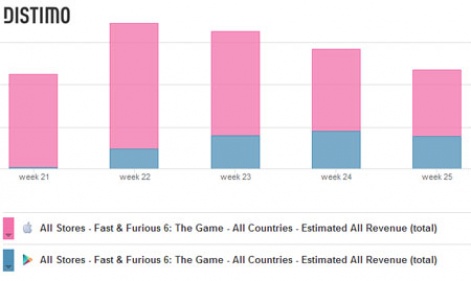 On this basis, it will generate over $2 million in the US during July, although the release of an update including prize-laden tournaments will likely raise engagement over the final weekend.

Taking a global approach, however, this success hasn't been mirrored in the big Asian markets.

The game has performed best in Korea where it remains in the top 100 top grossing on iPhone, although the Chinese market might get a lift when the film is released in the country, expected in late July. 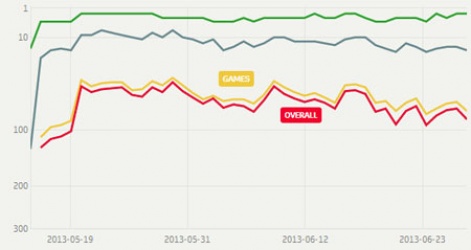 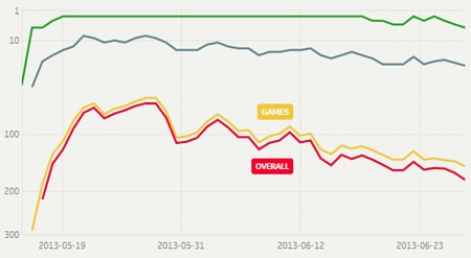 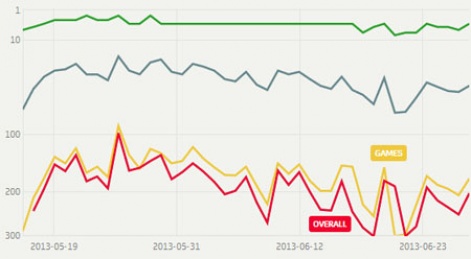 Distimo AppIQ provides download and revenue estimations for any app worldwide, based on daily sampling of transactional app data (>3 billion downloads / quarter) and publicly available information. When calculating downloads and revenues for individual apps, Distimo's unique methodology excludes that app's transactional data from the analysis to preserve the confidentiality of their users' data.