Chart of the Week: Korea and Japan are the key Android games markets

According to App Annie, it doubled overall revenue in the last half of 2012, although in absolute terms it remains some distance behind Apple's App Store.

Digging into the geographical detail, it's clear that (alongside the US) Japan and Korea are now the key markets.

Indeed, some commentators say that Japan is already the largest Android market in terms of revenue (including carrier transactions), and will become the largest iOS market in the coming months too.

Similarly, in Korea, the carriers have their own Android-based app stores, which are around the same size as Google Play in terms of generated revenue, suggesting App Annie's figures (in this case just being based on Google Play) are an underestimate.

Nevertheless, even dealing with App Annie's estimates, these two highly developed mobile market made up 50 percent of Google Play revenue in the period October to December 2012.

And what's really significant is these two markets are massively indexed for games. 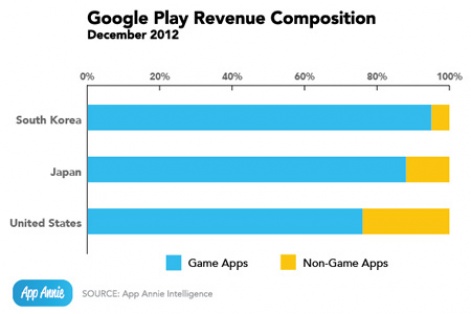 95 percent of all revenue on Google Play in Korea was generated by games, while in Japan it's 88 percent and the US, a 'mere' 76 percent.

The moral of this story? It could be to dial back on China for the time being.

Instead, focus on Japan and Korea, and especially their fast-growing social mobile networks - KakaoTalk and Line.