Not all markets were created equal 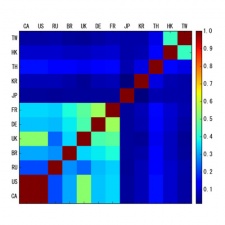 Japanese UA platform Metaps has released a guide for developers to help them decide which regions are the most similar and dissimilar in terms of game genres.

Perhaps unsurprisingly, out of all the app markets it was the US and Canada that shared the most similarities in their top grossing charts. After all, this is why Canada is choosen by many app developers to beta test their apps before launching them in the States.

In the east, Taiwan and Hong Kong mirror the US and Canada’s relationship.

Mainland China developers looking to reach Android users use these markets to reach out and circumnavigate the restrictions placed on the Chinese Google Play store.

Still, while these turned out to be the most similar regions, two stood out as completely unique.

Metaps revealed that the “Galapagos island nation” of Japan was a solitary market, with none of the other 11 countries surveyed in the study sharing strong similarities with it.

Korea also stood out from the crowd, however Metaps found that while neither Japan or Korea could link with other countries, they were strong markets for RPGs.

30 percent of the countries’ top 50 top grossing apps were RPGs, compared to just 6 percent for the US and Canada.

Strategy games, meanwhile, were most popular in Russia where 40 percent of the top grossing chart feature the genre. To put that in perspective, in Japan it totalled just 6 percent.

The full report is available on the Metaps blog, with the company hoping that developers can use its insights to create a localization plan for their games.