Ranking King, Zynga, EA, Gameloft and Glu in terms of their revenue and player reach 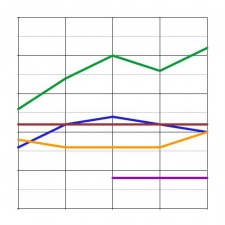 Back in the day of paid games, the business model for mobile game companies was a straightforward 'downloads x price' equation.

Now, companies who announce the download total of their F2P games are liable to trigger immediate scrutiny of their game's top grossing chart performance.

But more than that immediate check, the platform for longterm success in the industry is now the ability to maintain a high and consistent level of regular players - the DAUs and MAUs so loved by CFOs.

With this in mind, we've been digging through the publicly available numbers of some of the key western mobile games companies to see who are current winners and losers, and what future trends we can discover.

The first graph to consider is the monthly active userbase.

As can clearly been seen, thanks to its ultra casual audience and massively successful games such as the Candy Crush franchise, King (NYSE:KING) is the mobile powerhouse when it comes to a mass audience.

It has over 450 million active players on a monthly basis, compared to around 150 million for Gameloft (EPA:GFT) and EA Mobile (NASDAQ:EA).

Troubled Zynga (NASDAQ:ZNGA) has been slowly shedding players (something we can clearly see in the rebased graph below), while Glu (NASDAQ:GLUU) has been steady over the past 18 months: both roughly around the 75 million mark.

Looking at the more regular Daily Active Users, we see a similar picture. EA Mobile doesn't announce its DAUs, but once again King is by far the market leader.

Interesting, thanks to its mixture of highly engaged casino and word games, Zynga's DAUs level is much higher than Glu; higher even than the players generated by Gameloft's large portfolio of titles.

King is the mobile powerhouse when it comes to a mass audience.

Another way of crunching these numbers is to look at ratio of daily to monthly players; something that provides an idea of how committed a company's audience are to their games.

Again King rates highest (around 28%) but its lead is much less pronounced, with Zynga at around 25%; a percentage that has increased as it's been losing players.

Both Glu and Gameloft - which anecdotally would seem to have a more core audience - are around the 10% mark; at least suggesting they have an opportunity to drive higher DAUs numbers from their monthly active audience.

So much for player numbers, though. Show us the money.

To attempt this, we've compared the DAUs and the MAUs size to each company's quarterly sales total. Not a precise comparison, partly because Zynga and King generate some revenue from non-mobile sources, there's also the issue of comparing US and French accounting.

In this case, we've taken the non-GAAP revenue for the US companies, which is closer to French accounting rules than the standard GAAP total.

Looking at the revenue generated per daily active player, we can see that it's Glu and Zynga who lead the pack.

Zynga shareholders will be happy to see it's better monetising its daily players.

This isn't unexpected as Glu has a relative low DAU total, but does suggest that with its core games such as Deer Hunter (and Kim Kardashian: Hollywood, which has peaked) its monetising its daily audience better than other companies.

Zynga shareholders will be happy to see it's better monetising its daily players, although that trend will be partly moderated as it's losing daily players so obviously keeping the most engaged who are most likely to pay.

Also, its substantial social casino games will drive higher monetisation and have larger audiences than most other genres.

King's huge audience is harder to monetise on this level, so its position is not a surprise either.

Looking at the same graph for MAUs, the trends are similar.

Given Gameloft's well-publicised financial issues over recent quarters, its position is perhaps to be expected.

On the positive side, turning around the company - perhaps with an aggressive merger - could provide a platform for growth towards the $1 per MAU that other companies are generating.

When it comes to drawing conclusions, there's no need to over analyse. We can simply describe each company in the following terms: