May 4th, 2011 - 03:48pm
By Keith Andrew
Android might outnumber iPhone when it comes to userbase size, and Android Market's library is due to surpass App Store in the coming months, but when it comes to revenue, Apple's platform remains king.

The latest study by IHS Screen Digest has overall app revenues rising by 65.7 percent in 2011, coming in at $3.91 billion.

But the majority of that figure will be generated on one platform alone: the App Store.

"To no one's surprise, the Apple App Store continues to head off all competition," Screen Digest says in its report, claiming App Store apps will draw in $3.91 billion in revenue in 2011, up 69.2 percent from 2010.

More interestingly, however, said figure will account for 75 percent of all revenue from Screen Digest's pool of marketplaces, which includes the App Store, Android Market, BlackBerry App World and the Ovi Store.

It's a leading position Apple will hold in the years to come, with the App Store still claiming a 60 percent market share by 2014.

"Apple also will lead the way with revenue gained from in-app purchases - or additional purchases made within a paid application, such as bonus game levels - which will serve as a key growth driver for revenue up to 2014," the report adds.

However, despite Apple's lead, Android Market will be the fastest growing platform in 2011, with revenues soaring by 295.5 percent to $404.15 million as the store snaps up second spot.

Indeed, the market as a whole will continue to expand n the coming years, with Screen Digest claiming that even current also rans, such as Windows Marketplace, may have a much greater role to play as app downloads grow. 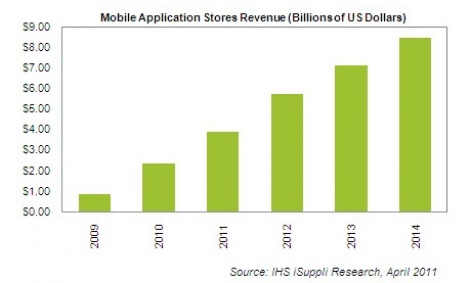