Carried out by YouGov Tablet Tracker UK, the research indicates that consumers were more inclined towards purchasing an iPad 1 than a more recent Android device.

72 percent of consumers showed a preference towards iPad 2 while 14 percent leant towards its predecessor.

Only a combined 14 percent showed interest in Samsung, HTC, BlackBerry and Acer tablets. Of those surveyed, approximatley 50 percent were already tablet owners, which YouGov considers representative of a "pre-existing propensity" towards Apple. 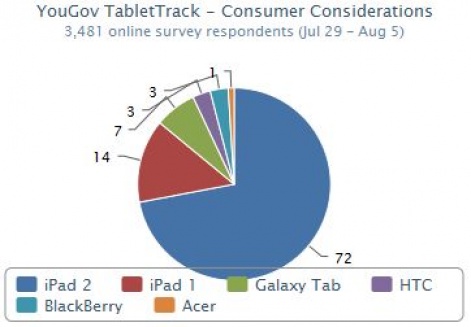 "Tablets will fail to be a mass market product until the price comes down to this price point. But, given Amazon's US launch price for its Kindle Fire at $199 versus the iPad2 at $499, we can only expect the same pricing differential in the UK and other global markets."

"This is the mountain Android-based tablets need to climb," he said.

"But, by launching a rival ecosystem at an extremely competitive price, Amazon is likely to make a rapid approach to the summit, at the expense not necessarily of Apple , but of its rival Android stable mates."

HP's Touchpad certainly proved that consumers have an interest in low priced alternatives, by selling out when prices plummeted to $99 during its own demise.

Its sudden popularity led research firm Canalys to state that HP should have reconsidered ditching the device.

More than half of all BlackBerry customers vow to abandon brand post BBM blackout, reports YouGov

1 in 12 buy tablets instead of PCs, laptops and netbooks in UK

Huawei is offering support to indie game devs through AppGallery