June 8th, 2012 - 11:24am
By Keith Andrew
Demand for Amazon's debut tablet may be falling away according to a recent study, but Kindle Fire's initial charge out of the blocks made a major dent in iPad's market share in the US.

InMobi's look at ad impressions made on tablets during the last quarter shows Apple currently holds a near 71 percent share of the market in Q1 2012,.

That's a figure down almost 11 percent from the previous quarter, however.

The reason behind the apparent slide, InMobi claims, is an Android onslaught, with Amazon's Kindle Fire having come from nowhere to gain a 9.2 percent share of the market. 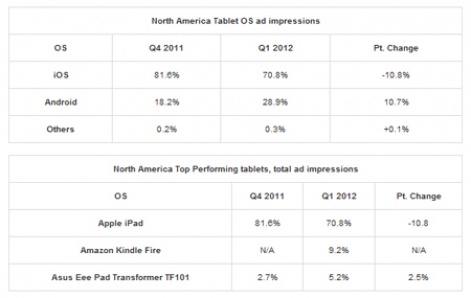 The only other tablet making any impact whatsoever is the Asus Eee Pad Transformer, with a 5.2 percent share.

"Richer web browsing experiences are achieved from the larger screen sizes and the reduced cost of tablet ownership is increasing their popularity," said InMobi's Anne Frisbie of the results, which show an 88 percent rise in tablet impressions overall.

"The nature of the tablet environment allows advertisers to create deep, rich ads that truly engage users and enhance their experiences - a trend that will positively continue in the future."