59% of gamers in South Korea play on mobile 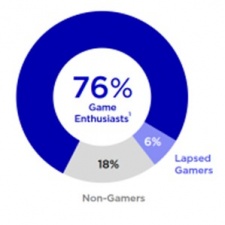 The latest report by Newzoo explores the gaming market in South Korea, the country ranked fourth for revenue spend on video games in 2021.

In total, throughout last year the games industry accrued $8.3 billion in revenue from player spending in South Korea where, according to Newzoo’s report, 33 million people play video games.

A population of gamers

Of the South Korean population, Newzoo considers 76 per cent to be gaming enthusiasts, engaging with games by playing, watching or owning them.

In terms of player motivations, Newzoo found social elements to be the most influential – the cause of play for 18 per cent. Action was most important to 16 per cent, and achievements were a big motivator for 15 per cent.

Of Newzoo’s categories of gamers, the biggest groups in South Korea are those who play casually to fill time (21 per cent) and "mainstream gamers" who invest significant time into the hobby (19 per cent).

Newzoo’s report also broke down gamers into categories depending on the devices they play. Mobile was found to be the most popular gaming device with 59 per cent playing games on phones – almost triple the audience for consoles – in the past six months.

However, users spent less time playing mobile games than other platforms, average four hours per week on mobile compared to five hours on both console and PC.