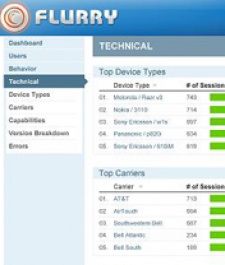 July 20th, 2009 - 11:00am
By Stuart Dredge, Contributing Editor
Mobile app analytics is becoming a big business, thanks to the desire from developers for as much data as possible about how their apps are performing against the market.

Flurry is one of the companies looking to provide those analytics, and recently launched a channel partner program, letting developers using Flurry's platform share performance and usage data with their brand clients.

It's available for iPhone, Android and BlackBerry developers, and is being targeted at the more than 9,000 developers who have already signed up for Flurry's free app analytics platform.

We asked Flurry VP of business development Sean Galligan whether this kind of information is increasingly important for the brands who are hiring developers to make their apps. "Without a doubt," he says.

"Brands have the expectation that they can measure their mobile application part of the business just like they measure their web and mobile web efforts. In particular, on new platforms like iPhone and Android, clients need to understand adoption and usage of applications and features, as well as justify continuing to invest in these platforms over time."

Galligan says this is particularly true against the current gloomy economic backdrop, where efficiency and return on investment are paramount.

He also says that developers see the ability to share detailed analytics with their clients as a way to ensure they get more work from them.

"Since contract developers often rely on repeat business from existing clients, so this opens up productive win-win discussions for how to improve a product with a new version or, in some cases, the release of a new application."

What about games, specifically, and how they fit in to Flurry's overall analytics business? Galligan says games is a big focus for Flurry, reflecting their popularity on the various mobile app stores.

"Game developers are a significant and active part of our development community, representing over half of Flurry-tracked applications," he says.

The kind of metrics being tracked by games firms include how many times people play free apps before buying the full version, how effective cross-selling other games is within a game, right through to how many levels players complete and which power-ups they select.

"Plus with Flurry User Paths, a feature that tracks the sequence of actions completed by a user within an app, developers making sandbox games can understand how users explore a world, the order in which they accept missions (and succeed or fail at them) and the sequence in which they complete missions," he says.

Earlier this week at the Develop Evolve conference in Brighton, Playfish boss Kristian Segerstrale stressed the increasing importance of data  and more importantly making sense of that data  to the social and mobile game industry.

Flurry, and rivals like Medialets and Pinch Media, are clearly well-positioned to take advantage of this trend.