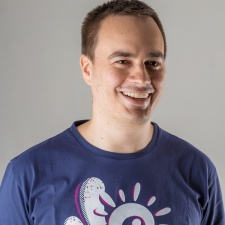 For years now Serbia-based developer Nordeus has made a big business out of football management game Top Eleven.

Carefully built up over the years, the game remains a stalwart in the UK top grossing charts, as well as in other countries around the globe. Given its success, it's a game Nordeus has no plans to leave behind anytime soon.

But while Nordeus has learnt the intricacies of what makes management sims great, the studio has decided to use those lessons to spread its wings away from Top Eleven and into a MOBA/CCG game.

The studio has soft-launched its latest title, Spellsouls, in countries such as Canada, Australia and the Netherlands.

The game pulls in a number of trending genres and features in the games industry right now, from real-time PVP to MOBA-style gameplay and CCG elements.

But given the high competition in these markets, particularly the latter, how does Nordeus hope to carve out a future away from Top Eleven? We speak to Nordeus Chief Creative Officer Milan Jovović to find out.

Could you explain a bit about Spellsouls and how it differs from what’s currently on the market?

In simple terms, we have a created a fast action real-time PvP mobile strategy game/MOBA, clearly based on the well-documented passion gamers have for speedy head-to-head battles.

We’ve focused on a rich, immersive fantasy experience with gameplay based on the casting of a myriad of spells during intense three-minute battles. One of our mantras from the start was to create a triple-A quality mobile game. We’re comfortable we’ve achieved that.

We think we’ve struck an intriguing balance, blending deep strategy with a powerful story-driven fantasy experience. It may be a cliché, but we’ve focused on a experience that should be easy pick up, but tough to put down for hardcore and casual gamers alike.

We’ve obviously seen the trend for cartoon-style and superhero IP out there, so we’ve focused on taking gamers into a more serious, dark world, where strategy and spells have immense power, and characters are well developed and have a rich, intriguing deep back story.

What are some of the features you’re particularly proud of?

In terms of features, I think we’re most proud that we have brought some real depth, to what we have already stated, is quick battle experience over three minutes.

Once we could see that Top Eleven was established as a resounding success; we knew we wanted to make more games.

It’s seriously intense, with longevity a key part of how the game is built - we want people coming back every day. But we’re focusing more on the longer-term retention metrics, so much more than the days one to 30.

I think we’re also proud that the we have built such strategic depth with the sheer volume of spells we have that ultimately have a massive impact on each player’s strategy.

All of this would be irrelevant if we didn’t have a strong meta-game, the chance to run live events and the flow of enhancements we have planned post-launch.

How and when did you come up with the idea for Spellsouls and why did you bring the game into full development?

Obviously, once we could see that Top Eleven was established as a resounding success; we knew we wanted to make more games. We have been very deliberate and planned for this carefully and with an open mind, giving our teams the freedom to create and choose the direction we moved in.

It was probably almost three years back that we started to really put thought into a game that was codenamed “wizards”, that focused on the idea that a three minute PvP battle set in a fantasy world was a compelling proposition.

We’ve also spent a lot of time talking to gamers, understanding what motivates them and what they want from a mobile game. User-centric design is important to us.

In some ways, we are further vindicated with our decision to take this direction by guys like Supercell, with them bringing the excellent Clash Royale to market.

How big an investment are you putting into the game? Are expectations high?

I don’t think we’d share a dollar amount on the investment; but anyone can appreciate that running a full development team for well over a year has it’s inherent cost!

We are further vindicated with our decision to take this direction by guys like Supercell bringing the excellent Clash Royale to market.

We had high expectations in the very building of this game. Everything from engineering to the art and sound is top notch. Now the players will judge. If we've done everything right, long-term commercial success will follow.

What are you looking to get out of soft launch?

As an industry, we’ve had the luxury of being able to test games in multiple markets prior to launching on full global scale; so there’s no secret there. We’re all after the same thing, and do all we can to prove that the game has the basic elements to be a success that we feel will resonate with our target audience.

We’d also be intrigued to really test server capacity and predict how it scales, obviously. We ran a successful closed beta program that taught us a lot and also engaged in some small group user-testing at the early stages to help prove or disprove our theories on how we turn this into a compelling experience.

The collectible card game market is quite crowded with some notable leaders in the space. What makes you think you can crack this market?

I don’t think we tag ourselves a CCG game per se. Yes there is fundamental card/spell-based mechanism to our game, but Spellsouls PvP and deep strategy are of much more importance than simply collecting and levelling up cards.

Regarding our ability to ‘crack’ this market, we have spent a lot of time in dialogue with current players of competitive games in this space, and the feedback we get overwhelmingly points to the fact that we have created something that meets their needs and offers the depth and polish not seen in a number of games in the market.

We’re expecting to compete with the best games out there, and come well equipped.

Since you are creating a new fantasy world for the game, are your ambitions to create a franchise out of this?

We build the game with longevity in mind. We want this to be around for years, as Top Eleven has been for almost seven years now.

We’re taking care to build the brand with clear attention to detail, but no one can predict if this has what it takes to become a major gaming IP. We have been methodical in our planning, and feel we are building a rich world with strong characters, so let’s keep our fingers crossed.

What learnings from Top Eleven will you be bringing into Spellsouls?

We have a number of strengths in the company, proven on Top Eleven. We have a very strong research / user-centric approach to game development, a strong and passionate development team and a superb environment that continues to yield excellent results.

We could probably roll out our own tools to the industry and people would be impressed at the depth and sophistication of the tools.

Obviously, we’ve been able to run a successful games business for almost seven years, and with that comes a high degree of learning and commercial intelligence.

I’d say that we also have one of the strongest data science teams in the business, to the extent that we could probably roll out our own tools to the industry and people would be impressed at the depth and sophistication of the tools.

We also feel that we really understand mobile consumers, and their behaviours, on a global and local scale. And finally, we really feel confident in being bold and pushing the limits of the industry, where we can.

You’ve had great success with Top Eleven, so why not release another similar game in the genre?

It’s always an option, and something we think about a lot. Obviously football and sports are both crowded genres, but we continue to discuss ideas around what might be next for Top Eleven.

We continue to fine tune and improve the game; and listen carefully to our fans, and that is our focus for Top Eleven for now. Let’s see how we feel after Spellsouls is launched.

We believe in quality over quantity, so let’s see how Spellsouls does, and go from there.