Rovio's Tommi Koivisto and Sandro Kvlividze walks PG.biz through the delicate balance of renovation while returning to Angry Birds' roots 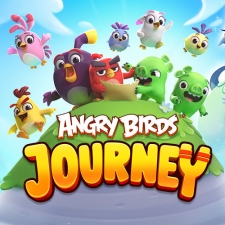 This week, Rovio's Tommi Koivisto, senior producer, and Sandro Kvlividze, lead designer, walks us through the process of creating Angry Birds Journey, taking one of their most renowned franchises and making something both old and new to reach returning players and newcomers alike.

PocketGamer.biz: Where did the initial idea of Angry Birds Journey come from?

Sandro Kvlividze: It originated from us wanting to make a game that would go back to Rovio’s roots, but also be more approachable than any instalment before it. So we knew it had to be a slingshot game and we also knew that major redesigns were in order. This starting point served as the basis for the plethora of design decisions that followed.

Tommi Koivisto: I remember hearing about the game concept for the first time in summer 2019. The game lead, Timo, and the Lead Designer, Sandro, had started concepting the game a few months earlier. In the beginning it was just a few people working on the prototype, but when I joined the project two years ago in January 2020, to make preparations for the first test launch, we were around 12 people.

Kvlividze: From absolute zero to global launch, it took a week shy of three years. I joined Rovio at the end of January 2019 and started research and concepting during my onboarding week. After the concept was solid enough, I worked with a great external programmer, Sampsa Lehtonen, and we had the very first early prototype around March 2019, at which point Timo joined, forming the initial team of Angry Birds Journey.

Koivisto: The production phase before soft launch was carried out with 15 people in the core game team. The team has been growing towards the global launch, and now, at launch, there’s around 25 full-time people in the core product development team, a dozen in the marketing team and several others working on the game on a regular basis. The game credits lists more than 70 people who have worked on the game over the past three years. In addition, we have employed external partners in QA and level production.

What was the biggest challenge or setback to overcome during development?

Kvlividze: From the design standpoint, the biggest challenge was finding a working game in the big unknown we set out to explore. While Angry Birds Journey is a slingshot game in appearance, the intention for it was to play very differently from any other instalments we’ve previously made in this genre; and because the slingshot core is largely uncontested, there were no other games out there to have as a reference. Some of the elements we needed to work in order to achieve our vision were highly likely not to. Luckily, we’ve managed to navigate the unknown and come out the other side with a game we can share with millions of people today.

Koivisto: This is a tough question, because the whole production has been a surprisingly smooth ride. Even the new features we’ve developed during the soft launch have worked out and improved the game KPIs, with the exception of one feature, which we decided to put back to the drawing board and iterate on before testing it again. Of course, building a game with a relatively small team can be challenging, because you need to be very careful with where you put your resources, and keep prioritising the items on the development backlog continuously.

Kvlividze: To echo what Tommi said, compared to any other game I’ve worked on in the decade I’ve been in this industry, this has been one of the smoothest ones; to a point where one of my personal production challenges has been a constant paranoia of something about to collapse and us not seeing it. That ‘something’ is taking its sweet time and I'm not going to complain.

What were the additional considerations when developing a game not just in a recognised IP but one of the most noteworthy mobile titles?

Kvlividze: The rules and challenges for making a successful game in 2022 vs 2009 are vastly different. Simply carrying over something we’ve made more than a decade ago with a modern look wouldn’t cut it, so paying enough homage to the original and the universe that spun out of it while making it relevant today was, and still is, an ever-present balancing act.

Koivisto: When a player downloads a new Angry Birds slingshot game, they may have some expectations for how the game looks and feels. Certain elements have to be there: the physics, the delightful destruction, the core flock, the bird powers, and… the piggies! The first test version of the game didn’t include piggies at all, but it turned out the piggies are such an important part of the brand and the Angry Birds universe that we decided to bring the piggies in.

At what stage of development did you feel you had a game you were happy with?

Koivisto: The core game and level mechanics started to feel very good quite early in the process but getting the visual progression working was the biggest milestone for us. We wanted to tell a story with the lobby screen images and reveal new story snippets as the player progresses in the game.

Kvlividze: Although the core had many challenges, as Tommi said, it came together relatively quickly. While I let Tommi answer this one, I want to share a tidbit about the very first time the excitement started picking up around the prototype. The slingshot cart on wheels has been a part of Angry Birds Journey from day one, and somehow survived throughout all the development phases which is pretty rare for a feature like this.

Its early iteration was such that, after all the level goals were cleared, the cart would roll across the level and crush all that remained, in all its clumsy death machine glory. Everyone found this moment in the game overly delightful and we really wanted to keep it. Unfortunately, the cart would often flip, fall into a pit, or face other seemingly trivial obstacles making the transition either too long, or entirely impossible… so we've had to scrap it… for now.

Koivisto: The narrative consists of chapters, and each chapter includes several episodes. When a new episode opens, the illustration on the lobby screen is incomplete, and as the player plays more levels, we reveal more story snippets, which complement the image. When a player enters a new chapter, they’re taken literally to another part of the world, which doesn’t change only the environment in the episode images, but also the in-level visuals and music. Each chapter has different level backgrounds and decorations and a soundtrack of its own. This concept was so strong that we knew immediately that we had nailed it, when we saw it in the build for the first time in September 2020.

Then we needed something for the players who have reached the end of the level content, and added Gaia’s Challenge, the end of content event, which reuses levels the player has already played. It was probably after that that we decided we’re ready to start the soft launch in January 2021, and used the remaining time to add some more meta game features and polish the existing ones.

Koivisto: From the production point of view, the soft launch was great for building and improving the production processes and the pipeline for all development tracks: level design, art, and new features. Soft launch was also an important time for our user acquisition team to test different creatives and networks and learn about different markets.

Kvlividze: The soft launch helped us validate that the game features work as expected and also polish and balance the level funnel. We got very valuable feedback from the players and improved the UX in many ways.

How are you approaching live ops, and what can you tell us about your plans in terms of updates?

Kvlividze: At this point in development, the number of things we know could potentially benefit the game is always going to be higher than the number of hours we have to implement them. Besides man-hours, anything we add to the game also has a design space cost - meaning if we add a feature here, it will occupy a visual (and virtual) space in the game and mental space in players’ minds, both of which are finite. So it’s a game of managing those spaces and opportunity costs. Everything we add has to bring enough value to justify its place in the game.

Koivisto: Every Monday, there’s a new level pack waiting for players, and we will keep building new level mechanics continuously. New updates will be rolling out on a monthly basis improving the game and bringing more content and new features. We will surely develop more events to bring more variety, and are also looking into building social features and collaborative events.

Finally, what were the most valuable lessons from Angry Birds Journey's development that you'll take forward to other titles?

Koivisto: Haha, this goes into details, but in the next project I would bring the localisations in the game already earlier during the soft launch, instead of just before global launch, to iron out all issues with fonts, translations, UI layouts, and special characters a bit earlier.

Kvlividze: This would be more of a confirmation of something I already believed in, but the making of Journey was such a good illustration of it that I think it’s worth mentioning still - having a clear understanding of what you’re looking for early on, will make a world of a difference when you venture into the unknown.