When to cut the price... and when to put it back up again 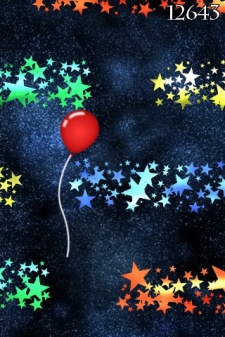 February 9th, 2009 - 02:24pm
By Stuart Dredge, Contributing Editor
Last week, we wrote about a fascinating blog post from iPhone developer Majic Jungle, talking about the pros and cons of dropping the price of your iPhone game.

Now fellow developer Veiled Games has gone public with its own experiences, based on its iPhone games Payday Roulette and Up There, with the latter proving particularly interesting.

It includes this graph illustrating the game's sales over time, where A is the moment the game was featured on the US App Store, B is where Veiled Games dropped the price to $0.99, and C is where it put the price back up to $1.99 as the game dropped down the chart. 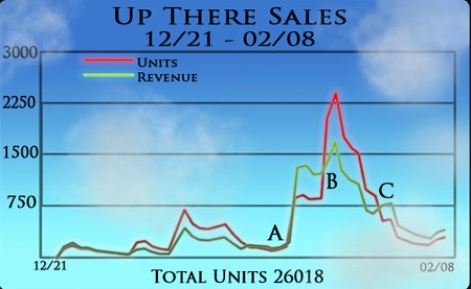 "Before we put Up There on sale at B, we were ranked in the top 40," says the blog post. "After the sale, we moved to a high of 21 in just two days. That sale doubled our ranking, and moved our income from 1321 dollars the day before, to 1845 dollars the next day. If youre going up, ride that rocket hard friend."

When the game fell to 31, the developer put the price back up to $1.99 - and admit this may have been a mistake, given that in the following 48 hours, Up There dropped out of the top 100 entirely.

That said, it seems to be working out well in the long-term:

"Yeah, we got off the top 100 in a hurry. But its looking like were stabilizing. If we were at 99 cents now, instead of 1.99, would we be making half the revenue? Would we be looking forward to another drop when we ended the sale later? I dont really know, but I like to think so..."

With 26,000+ sales, Up There isn't going to be giving Gameloft and EA any sleepless nights, but that's not the point.

Developers like Veiled Games are busily figuring out how to make decent, stable money from the App Store through price variation and other tactics - in a way that simply hasn't been possible for independent mobile developers in the past on other platforms.