October 16th, 2012 - 06:17pm
By James Nouch, Staff Writer
A survey of more than 400 developers has concluded Samsung is the the top Android OEM when it comes to testing apps.

Conducted by Evans Data, the results are fairly conclusive, with almost half of all those questioned branding Samsung's devices as 'ideal' for testing.

Top of the pops 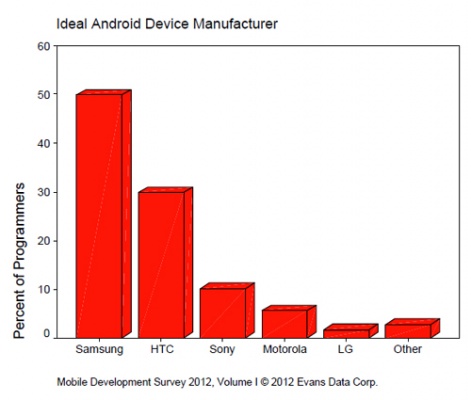 The Korean OEM overtook Nokia as the world's largest mobile handset manufacturer earlier this year, and its handsets are easily the most popular on Android.

For Android developers, then, testing on Samsung devices is a matter of efficiency, since these handsets are what the majority of their customers own.

"Developers must test their applications to work on numerous implementations of Android that vary by manufacturer, or even within a single manufacturer's collection of offerings. Android fragmentation is a reality that developers will have to face if they decide to work on Android."