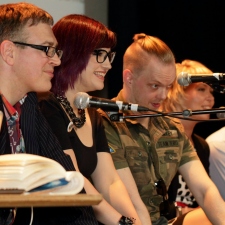 Nordic Game 2014 might be underway, but it was PocketGamer who kicked off the week’s mobile menagerie in style in the form of another highly anticipated Mobile Mixer in the Swedish city of Malmö.

Last night a panel of industry experts took to the stage at the Babel Bar in Malmö to discuss the finer points of mobile gaming.

With the crowd firmly in their seats, Chris James, MD of Steel Media, kicked off proceedings by asking why the Nordic territories are playing host to a mobile renaissance.

"It’s fair to say that the Nordic territories, clusters, or regions, are incredibly hot right now in the mobile space," said James, “but why do we think we're seeing such success in these particular regions?”

The answer for Henrik Jonsson, CEO at Divine Robot, was simple: the mobile industry is exactly like the early rock and roll movement.

"It's just like rock and roll," explained Jonsson. "The market place for modern mobile gaming was pioneered in the US, but now we're seeing it being perfected in Europe, in regions such as Sweden and Finland."

The Nordic territories aren't the only ones shaping the future of the industry though, and according to Julia Lebedeva, business development director at Nevosoft, the Russian gaming scene will have a huge impact ’if’ it gets the funding.

"Give us a year or two and you’ll hear more about Russian developers, said Lebedeva. “The only problem is, like in Sweden or Finland, the government doesn't give us much support.

“That means it's pretty hard to get any real support, so companies have to do it all on their own.”

Our panel agreed that in order to truly succeed, mobile developers mustn't rely on funding alone. They need to rely on each other and, more importantly, the global gaming community.

“We find ourself collaborating with other companies a lot of the time,” explained Everyplay's Mika Patiala.

Of course, while mobile goldmines can be found in more than one region, the Asian market in particular is undeniably lucrative.

Tapping into revenue on a global scale, however, is difficult, and some have even labelled it an impossible task.

“I guess in the long term we are thinking about those (Asian) markets,” admitted Jonsson, “because being a smallish indie studio, we have to make games work as a business, because we incur costs making them.”

“That being said, 80 percent of our income currently comes from the US, so we need to focus our efforts on that market.

“The same thing that works in the US won't work in China,” added Patiala.

“Of course we’re looking into Asia, but it's a completely different market.”

Labelling games cold hard products in a room packed with developers was always likely to turn a few heads, and one audience member wasted no time in explaining that under no circumstances should monetisation be allowed to compromise a developer’s vision.

That sentiment was echoed by Sara Lempiainen, Goo Technologies’ evangelist and games community manager, who refuses to believe that “designing a game for success” is the way forward. Games, after all, “are art”.

It's a debate that doesn't have an easy conclusion, and ultimately our group of experts couldn't decide whether it was better to focus on a single vision, or allow that vision to be manipulated by monetisation.

Jonsson, though, did have one piece of advice for indie developers looking to create a game untainted by monetisation: “I'd advise them to keep their daytime job.”

Thanks to all of our fantastic panelists and our sponsors Creative Mobile and Everyplay. You can see our photos from the event over on our Facebook page.

Join Pocket Gamer at Develop for The Big Indie Mixer

Mix it up at the Google I/O Mobile Mixer

Join Pocket Gamer in Tallinn for our next Mobile Mixer