Risk equals reward: King's Tommy Palm on heading east and tapping into the next generation 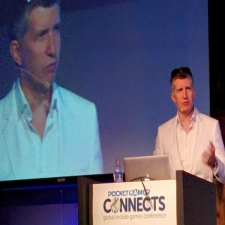 It's no surprise that every developer worth their salt is looking towards the Asian markets. The reasoning behind the industry's eastern assault is simple: if you're looking to become a player in the mobile industry, you have to have global ambitions.

That's according to King's games guru, Tommy Palm, who was speaking at this year's PG Connects conference in Helsinki.

King, of course, is one of the few companies that have the right to offer such advice. After all, the Candy Crush Saga developer didn't become a superstar by keeping its feet rooted on home turf.

It's time to go mobile

Indeed, developers must be willing to step into the great unknown if they want to reap the biggest rewards, explains Palm, pointing to the fact that the Asian markets are currently dominating in terms of revenue.

"If you look at the top charts across the globe, you can see that the Nordic regions are over-represented - especially if you compare to the actual population," said Palm.

"I always think the advantage developers from Finland and Sweden have is, our home regions are so small that very few of us would make games for this region, so go global.

"The top three countries last year by revenue according to App Annie were Japan, US, Korea, and everyone knows China is one of the fastest growing markets for mobile at the moment,"

While smartphones are undoubtedly turning the world into a global community, they're also helping introduce games to a new generation.

"New target groups are now being reached thanks to smartphones. I never thought that the generation that came 10 years after me would convert to gamers, but with casual gamers it's becoming obvious that everyone can be a gamer.

"If you make your game accessible, once the hurdle of making an up front investment has gone, it all becomes much easier.

"Smartphones are helping the world to shrink," concluded Palm, "We're getting common stories now. Marketing and analytics need to be local, but gameplay can be global, or universal even, reaching out to everybody."

For future success, Sweden's next generation of games gurus go back to the Cabin