Somethin' Else on the power of spatial audio to streamline UX 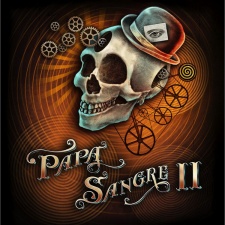 Papa Sangre II is a game which propelled Pastor's team to critical acclaim, particularly due to its skillful use of sound design to create a rich atmosphere.

Visual representation was extremely minimal, and players were encouraged to focus on binaural audio in order to inform their in-game decisions.

Developed using the team's proprietary Papa Engine, the technology behind the game's immersive sound plays upon what is known as head-related transfer function (HRTF), a response in which the ear receives a sound from a point in space.

Given a HRTF in each ear via headphones, the player is left with a binaural sound which seems to have come from a specific direction.

However, despite the praise from critics, Pastor noted in his talk that Papa Sangre II experienced a significant drop-off in players at a fairly early stage, presumably because of the game's slow pace and reliance on a dynamic he termed "listen then move".

Listen to the audience

Rather than giving up on binaural audio-driven gameplay, or indeed the Papa Engine, Somethin' Else instead intended to redefine the use of spatial audio to create something with an altogether more immediate, universal appeal.

Audio Defence: Zombie Arena is the studio's latest, a zombie shooter that has you spinning your device around in a real space, reacting to the spatial grunts and groans of the surrounding zombies by firing towards what sounds like the source.

Attempting to redress some of the key issues which resulted in Papa Sangre II's status as a critical darling rather than a fan favourite, Pastor talks about the ways in which things have changed: "listen then move" is replaced by "just rotate, pick, and play", and "driven by narrative" is replaced by "less talking more shooting".

The crux of Audio Defence is, as Pastor points out, based on the same fundamental imperative to "listen to your environment" as in Papa Sangre II, although it is an undeniably more arresting proof-of-concept to see someone playing a game – quite successfully – by spinning around with their earphones in and their eyes shut.

One of the most interesting moments of Pastor's talk was his comparison of a screenshot of mobile first-person shooter Dead Trigger 2 with one from Audio Defence.

The former featured a screen so busy with virtual sticks and buttons, ammo counters, and radar, while the latter shows little more than a gun icon which acts as your trigger.

That is potentially the greatest way of summarising the potential of binaural audio, as this comparison of screenshots showcases just how much can be conjured with Somethin' Else's audio technology alone, without any need for visuals.

And while nobody would suggest that Audio Defence is by any means a comparable game to Dead Trigger 2, the fact that it conveys the same basic sense of shooting a zombie through audio technology alone bodes well for the future of binaural audio in mobile games.

GameAnalytics on how to design good games for messenger apps