Strap on your joy-con and squeeze 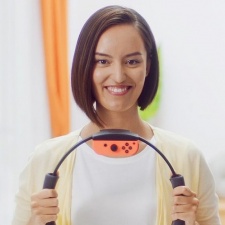 In a video on YouTube (below) Nintendo also revealed its new accessories for the Switch are the ring-con and leg strap.

The company teased its new fitness device last week showing a group of people using the accessory in a YouTube clip.

The video demonstrates how the device is used - the leg strap detects lower body movement, meaning players need to run on the spot to move in the game.

While the ring-con is used for the upper body, the ring is an electrical device, it senses and tracks player movement.

Players can play the story or quick play mode - users can choose specific muscle groups to focus on in either sets, simple mode or minigames.

There are enemies to attack in-game; this is done through exercising various parts of the body.

Ring Fit Adventure is the latest fitness game created by Nintendo. The Japanese company has made several exercise focused titles for its consoles.

The Wii had the Wii Fit, with a board on which players could perform physical activities. Wii Active and a Zumba game were also available on the platform. Most recently, it released Fitness Boxing for the Switch.