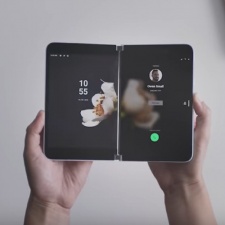 Amidst the wave of new Surface PC devices announced by Microsoft, its Surface Duo folding screen phone was a pleasant surprise.

Not too much is currently known about the Surface Duo, which isn’t due until late 2020 and is currenly described as an "early preview".

It will, however, run Android and is described as bringing “ together the best of Microsoft and Android to reimagine productivity on the go”.

When open, the device has a 8.3-inch touchscreen, which folds down to dual 5.6-inch screens, each of which can run different apps or games simultaneously.

Of course, OEMs such as Samsung and Huawei have already touted foldable phones but nothing very robust - at least in terms of being sufficiently robust for mass market adoption - has yet shipped.

In that context, it’s importance to note Surface Duo doesn’t have a soft hinge to attempt a seamless large screen area. Instead its 360 degree hinge means there’s a physical bevel running down the middle of screen.

Reply
Kenji Fujimori
Microsofts Indian CEO is a sellout, for their server business disses MS Server for Linux and now this.. Bill Gates should return to the helm..and Steve Balmer
Posted 4 months, 3 weeks ago