Manchester City, AC Milan and more are coming to Fortnite 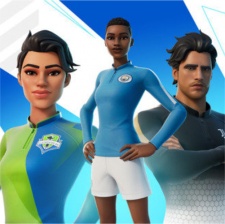 Football is about to make an appearance in Fortnite.

Epic Games has partnered with 23 teams from around the globe to bring the sport to life in its battle royale hit.

From January 23rd, players can choose from 10 variations of male and female outfits, all of which can be customised to support one of the 23 clubs.

However, there is a range of other teams from around the world too, including several US-based and Australia-based squads.

If players would like the chance to get their hands on the kits early or to nab the Pelé air punch emote, then they can take part in the Pelé cup starting today.

Moreover, those who score the most goals will also be in with a chance of winning a customised signed shirt.

Furthermore, a new football-inspired creative island has been added to the Creative Hub. In which players can take part in a four-versus-four bracket-style game mode.