Blockchain applications in gaming "not yet realised" 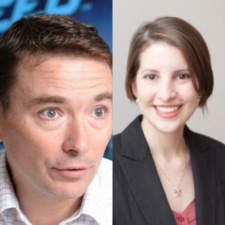 Following the release of Newzoo’s State of Gaming 2022 report, Julianne Harty, lead games market specialist at Newzoo, and Gilles Langourieux, CEO of Virtuos, shared their thoughts on the most disruptive trends of 2022 and how their potential can be realised.

Topics during the joint Virtuos-Newzoo briefing included the proliferation of mergers and acquisitions, overcoming the backlash against blockchain, and gaming IP's transmedia value.

Mergers and acquisitions and consolidation in the games industry

Gilles Langourieux: From around Q3 2020, investors began to take significant notice of how well the games industry is doing; Virtuos received non-stop weekly calls of interest between October 2020 to March 2021. It’s what encouraged us to look at what investors were looking at.

It’s never been easier to find good money to fund your game, I see mostly positives. There is a risk that, in the future, only two-or-three platform holders decide what games people play but I have enough trust in the industry to diversify in the face of consolidation.

Hostility towards blockchain and NFTs

Julianne Harty: The terms themselves are very heated, and developers have to tread very carefully. Among the gaming community, blockchain and NFTs are a solution to a problem that doesn’t exist. A lot of applications within the gaming environment hasn’t been realised: the principal benefit of blockchain is that it is decentralised, and games are trying to utilise blockchain in a centralised environment.

A lot of the antagonism comes from the concern that it’s another money scam and attempt at creating value where value shouldn’t exist. I’ll kickback against this: player-to-player trading has existed for a long time - such as the CS:GO skins market, which has operated for many years.

Langourieux: You’ll always find a vocal minority that emphasise the threats brought about by new technology, but we have to be patient for blockchain to present itself as a solution. One problem I have as a CEO with blockchain is Virtuos' commitment to reducing our carbon footprint. I have struggled to find solutions with a negative carbon footprint, but we need to be responsible and patient to allow the benefits of blockchain without the huge environmental impact to happen.

When does the blockchain conversation move beyond active participants?

Harty: The 2022 GDC State of the Games Industry survey revealed that the majority of developers are still against blockchain and NFT, and I don’t know if there will be a huge change. While gaming is a revolutionary industry, it is also very reactive. It is going to be a tough battle to make it more mainstream.

Gaming in the Middle East

Harty: There are huge opportunities in the Middle East. As 5G starts to rollout and cloud gaming becomes more mainstream, people will ditch hardware that is currently the barrier to entry. There’s a pent-up demand and interest, but that interest is now catching up with capability.

Harty: Many 2022 trends are evolutions of what exists already. Games IP has been utilised in entertainment media, as way back as the old Mario and Warcraft movies. They haven’t always been successful, but the popularity of Arcane and the Witcher on Netflix is showing the true value of games IP.

Games IP promises in-built groups of fans to support quality content. Games companies can recognise the quality of their IP, not so much areas like sequels and DLC products, but perhaps looking towards a transmedia outlook.

Harty: Play-to-earn has been around for some time, and there is more emphasis from players who want to see true value from what they are doing. Importantly, they’re not looking for another job, which is an obstacle for terms like play-to-earn, but there should be a chance to monetise what they’ve gotten through luck or their own hard work.

Finding the right balance will be essential. The waters are a little treacherous and games studios have to tread carefully, but they have to understand that games are meant to be fun and the gaming audience is very dedicated and diverse and want to see their game experiences as long-lasting. Games studios should cultivate that relationship for success.