Arunabh Madhur from SHAREit spoke with us at PCG Helsinki about the peer-to-peer file sharing app. 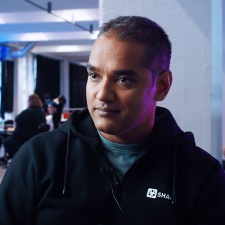 Pocket Gamer Connects Helsinki took place last month, marking a huge ‘live action’ return for the event. Two full days of insight and industry connections took place with over 1550 attendees, 700+ leading companies, and 56 countries represented. Over 200 speakers from across the global games industry took to the stage to discuss the industry and share future ideas.

During the event we took the time to sit down with some of the most influential attendees to talk about what they are currently doing within the world of gaming, and what lies ahead.

Arunabh Madhur, the regional vice president and head of business EMEA at SHAREit, spoke with James Gilmour at the event to discuss SHAREit, a global internet technology company that aims to make the sharing of digital content simple and accessible to everyone. The discussion addresses the goals behind SHAREit, such as how it has the potential to act as the 'airdrop' equivalent for android devices and how the app aims to make sharing documents, files and apps seamless for its users.

The SHAREit app has already been installed by nearly 2.4 billion users worldwide. However, Madhur states that those from Europe and the Nordic regions are less familiar with the platform. By attending PGC Helsinki for the first time the team behind SHAREit has been able to present the app to a wider audience.

We also spoke with Madhur just before PGC Helsinki took place to discuss the mobile games market and what challenges it could face in the future. Our next event is Pocket Gamer Connects Jordan, which takes place November 12-13. Tickets for the event are available for purchase now!

Adjoe on helping to grow apps through smarter advertisement