Working with the 'ultimate games platform' 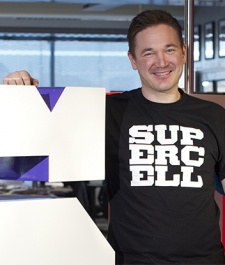 Catapulted to the top by just two games, Hay Day and Clash of Clans, Supercell's success is remarkable in its own right, but even more so when you consider the company's faltering beginnings.

With a troubled spell developing social browser games and four abandoned projects under its belt, the company's stratospheric rise hasn't been without its difficulties.

In our latest company profile, we speak to CEO Ilkka Paananen about those early days, Supercell's philosophy and why failure should be celebrated.

All industry veterans, with experience at studios as diverse as Digital Chocolate and Remedy, the founders created Supercell partly in reaction to their backgrounds.

"After working for big companies and shipping over 165 games across 12 platforms, we all wanted to build a different kind of game company, the one we'd always dreamed of," says Paananen.

"Quite simply, we thought that the best people make the best games and our main goal should be to get those people and create create a zero-bureaucracy type of environment for them. That was our inspiration."

Beyond this, Supercell also identified the advantages of building the company around a number of small, autonomous teams.

"Internally, we have a saying, 'small is the new big,'" says Paananen. "We're organised into 'cells,' small teams that operate very independently.

"The teams decide what they work on, and we only measure them based on the results. There really are no processes dictated by the management, and our organisation is optimised for speed.

"We're also very transparent and open, we share all data with everyone, every single day. And we have a very high degree of trust in our people, which is really what is required to make this type of approach work."

With a company structure in place, Supercell originally set out to create browser-based social games, releasing the free-to-play web and Facebook MMORPG Gunshine in 2011 with the help of $12 in funding.

However, launched towards the tail end of the Facebook game boom, Gunshine failed to generate enough player interest and was shut down after just 18 months.

"We learned quite a few lessons from that experience," says Paananen.

"Most importantly, how incredibly hard it is to create a free-to-play game that has both a wide appeal and high engagement and retention. Gunshine definitely was not one, but since then we've been lucky enough to get a few games right."

This shift in fortunes began with the release of a new product from Apple.

"In 2011 we simply fell in love with the iPad," says Paananen. "We felt that its technical capabilities, from its processing power to multitouch UI to screen size, combined with its mobility and accessibility made it the ultimate games platform.

"Also, looking at the market for tablet games, we realised we could offer some truly unique games for this platform, something that no one was doing yet.

As a result, Supercell went all in.

"We adopted a 'tablet-first' strategy," says Paananen. "What that means is our games are handcrafted for the tablet. We make no compromises for other platforms. Only after our games are fully baked and ready for the tablet, do we then look to optimise them for smartphones."

The first game revealed as part of Supercell's new philosophy was Battle Buddies, a colourful strategy title that promised cross-platform play across iOS and Android.

Yet it didn't progress beyond a soft launch in Canada and Finland.

Indeed, in addition to Gunshine and Battle Buddies, Supercell cancelled two further projects during a massively disappointing 2012. Paananen, however, is keen to put a positive spin on it.

"It's how we make sure that we are providing players with only the best experiences," he says. "We want players to know they can trust the Supercell name for giving them nothing but great games.

"All four games were retired at different stages in the product development lifecycle. Gunshine had been live in the market for some time, two games were in public beta and one game was still early in development.

"In each of those cases, we gathered invaluable learning that has helped the company and our other games move forward."

"We also think failure, or to be more specific, learning from failures, is a very integral part of creating successful games. Therefore we've tried to create an environment where failing is not only okay, it is actually celebrated.

"Every single time we need to cancel a product we buy bottles of champagne for the team that was behind that product. That is not because we love failing - who would? - but because we feel that it's important to celebrate what you learn when you fail."

Within just a few months Supercell would have something far more tangible to celebrate, as the company launched two titles a few weeks apart that would rocket to the top of the charts.

The first of these, Hay Day, evolved the concepts of Farmville and tailored the experience to iPad in a way that immediately resonated with players.

"We saw the tablet as a huge opportunity to broaden the appeal of an already popular game genre and bring it to new audiences." says Paananen.

"Using multi-touch and swiping controls to replicate the activities of a farm make the genre more engaging and fun, and the tablet screen gave us the power to make a farm game more beautiful than ever before.

"And, we wanted to take the level of social game play to the next level. One of the ways we do this in Hay Day is the real time trading system that has been incredibly popular among our players."

It remains popular too, taking up a seemingly permanent position in the upper reaches of the top grossing charts, thanks to a fiendishly effective in-app purchasing system.

"For Clash of Clans, we wanted to build a resource management game with player-vs-player combat that would have a mass appeal," says Paananen. "We wanted to take a fresh take on this genre, and create a game that was built for the tablet and mobile platform from the ground-up.

"It was always our goal to take a genre that typically veers toward the core gamer, and make a game that would have wider appeal, bringing new audiences to this type of game."

The plan paid off.

With estimated monthly revenue varying from $700,000 to $1,000,000 per day, it's fair to say that Supercell is currently the powerhouse in mobile gaming.

It's vindication for Supercell's methods, which have seen the company trading blows with EA in terms of mobile revenue despite markedly different approaches.

Supercell has two games on the App Store, while EA has almost a thousand.

"Our primary focus is on engagement and retention, not revenue or charts," says Paananen.

"We believe if you create very compelling experiences with high engagement everything else will fall into place. We also believe in focusing on only a limited number of great games instead of a large portfolio.

And as for the future?

"We've started work on some new titles," says Paananen, "and we will continue to pursue our vision for creating a different kind of company, one that is all about the people, and one that is around for a very long time."