The Charticle: Can Kabam keep its earnings booming in 2013?

That's an impressive accolade, but not an altogether surprising feat.
Battle for the North launched in March 2012, and after a steady climb up the charts, enjoyed an eight month unbroken run in the top 10 grossing games chart.

But while Battle for the North's success is well-known (and ongoing), it's certainly not the only ace up Kabam's sleeve. Arcane Empires is a popular multiplayer city-building game, for instance, and the studio has also struck a deal with Warner Bros. to create tie-in games for The Hobbit film trilogy.

So, in order to get a better sense of the company behind the most financially successful iPhone game of 2012, we've turned to the App Store charts.

While Battle for the North is a weathered success, The Hobbit: Kingdoms of Middle-earth is a promising upstart.

Launched at the start of November 2012, the game broke into the top 100 grossing games charts within 24 hours of release. 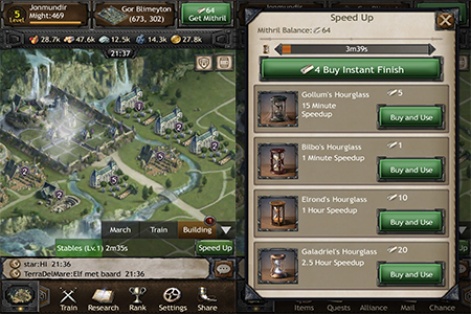 By early December, The Hobbit had made it into the top 25 grossing games chart, and the game's steady ascent through the rankings continued in the lead up to the film's 12 December release date.

Since then, the game's gradual ascent has continued.

Analytics graph showing The Hobbit's performance in the top grossing games chart for iPhone in the US App Store. Analytics courtesy of App Annie.

It's worth noting, too, that Kingdoms of Middle-earth has a web-based companion game in the form of The Hobbit: Armies of the Third Age, also developed by Kabam.

As such, the company may be able to cross-promote to players of both titles, sending movie-fans and engaged gamers from one Kabam title to the other.

Major Arcana
Arcane Empires is the third title in Kabam's mobile triumvirate, and the only one that isn't currently enjoying growth or stable mega-success.

The game shot up through the App Store's grossing games chart upon its release in August 2012, but since then, Arcane Empires has been in a state of slow decline.

It's currently ranked at #115 in the grossing games chart and the game is clearly trending downwards.

Analytics graph showing Arcane Empires' performance in the top grossing games chart for iPhone in the US App Store.

Of course, #115 is actually a perfectly respectable ranking, but a look at Arcane Empires position in the downloads charts shows that installs dropped off quickly after the game's launch.

Clearly Kabam is catering to an active and engaged audience that is monetising well, but that audience isn't going to remain forever if new players aren't installing the game.

Analytics graph showing Arcane Empires' performance in the downloads chart for iPhone in the US App Store.

In a press release issued at the end of 2012, Kabam boasted that, during December, it had become "one of the rare companies to have three games simultaneously ranked on the top 25 grossing apps lists for both iOS and Android."

We've struggled to independently verify this statement, but it's certainly true that Battle for the North, The Hobbit and Arcane Empires were all simultaneously ranked on the top 25 grossing games list for both platforms during December  a remarkable achievement for any studio.

And, crucially, Kabam's titles are still performing strongly. Although Arcane Empires has wavered, Battle for the North is currently #7 in the iPhone's top grossing games chart, almost nine months after launch.

With The Hobbit, Kabam has a game that's growing and cross-promotion opportunities, too.

The company has demonstrated its ability to manage a game and a community over a long period of time, and its gamble on multiplayer experiences for 'core' gamers has clearly paid off.

In 2013 the question will be whether Kabam can maintain and build on these successes in a market that's sure to keep changing.