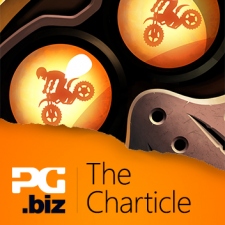 With Trials Frontier  reaching 12 million downloads - according to developer RedLynx - since launching on iOS in April and Android in May, it'd be fair to say the game has found an audience.

It's likely to get a boost in the coming weeks thanks to a big update, too.

But the question for this week's Charticle is just how well has the game been monetising?

Trials'  performance on the US download chart for iPhone leaves a lot to be desired.

The game began well enough, entering the fray inside of the top 10, peaking at #2.

Unfortunately though, things quickly went downhill from there, with the game plummeting out of the top 100 within 3 weeks of release.

Perhaps more worrying is the fact that the game couldnt redeem itself on the iPad download chart, where it again found itself falling out of the top 100 before it could catch its breath.

Despite dropping out of the US downloads chart for iPhone in April, Trials  managed to maintain a stronger position inside of the top 100 on the US top grossing chart for iPhone until mid-May.

The game peaked at #41 on the iPhone top grossing chart, where it briefly broke into the top 50.

After falling out of the top 100, it started to make a comeback, reappearing leaping to #53 at the start of June.

On iPad, Trials'  prescence inside the top 100 was virtually non-existant.

The game peaked at #93 on the US top grossing chart for iPad, breaking into the top 100 for a mere 3 days.

Over in the EU5 - Spain, France, Germany, Italy and the UK - Trials  has been faring better on the iPhone and iPad download charts.

Upon launch it shot to #1 in France, Germany, and Spain, and even though performances trailed off during May, the game still maintained a solid presence inside the iPhone top 100 in Germany, France, and the UK.

Trials  managed to replicate that consistency on the EU5 top grossing chart for iPhone.

Even though it never troubled the top 10, it did break into the top 50 in all 5 countries, and, impressively, also secured a place in the top 100 in all five countries until mid-May.

Trials  one again shot into the top 50 at the start of June.

On the EU5 download chart for iPad the game seized the top spot in every country apart from the UK, where it instead peaked just short at #2.

That universal success was short lived, however, with performances becoming increasingly erratic towards the end of April.

As of June the game has once again found itself inside of the top 100 in all 5 regions.

The game's performance in the top grossing charts of the EU5 on iPad hasn't demonstrated any stability, however.

After launch it broke into the top 100 in all 5 countries, but since then it has been hopping in and out of the top 100.

In the Nordic territories of Sweden and Finland (the latter being where the game was developed), Trials  couldn't find a foothold on either the iPhone or iPad download charts.

The game did well upon entering the charts, smoothly rising into the top 10 in on both the iPad and iPhone.

That success though, was short-lived, and it quickly took a tumble outside of the top 100.

Still, despite what appears to be a poor performance on the downloads charts, Trials  did well on the top grossing charts.

In both Finland and Sweden it broke into the iPhone top 50 with ease, and quickly established itself as a top 100 title.

Performances, particularly on iPad, did get a little more erratic during May, an obvious slow month for Trials, but the game was once again given a new lease of life at the start of June.

Overall, then while Trials Frontier  launched very well in terms of its initial downloads on iOS, RedLynx has plenty of work to do to retain those initial players and convert some of them into payers - particularly in the all-important US market.