The app store intelligence outfit has been estimating the competition between the main two app stores during April and June 2013.

It reckons Google Play is now the leader in terms of downloads; 10 percent more than Apple's App Store.

That's not too surprising as the install base of Android devices continues to grow very quickly.

Of course, not all Android devices can access Google Play, notably those in China. The growth rate is also being driven by low-end devices in emerging countries. 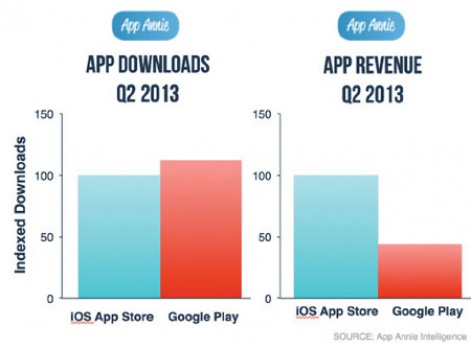 And that's why App Annie puts revenues from the App Store as still being significantly ahead - 2.3 times, in fact.

The places to be

In terms of what's driving this activity, games remain the largest category.

App Annie reckons they account for 80 percent of revenue on Google Play and 75 percent on the App Store.

US (#1), China, Japan, the UK and Russia are respectively the top 5 countries in terms of download volume on iOS.

When it comes to iOS revenue, the order is US, Japan, UK, Australia and China.

Revenue-wise, however, it's Japan, followed by South Korea, the US, Germany and the UK.