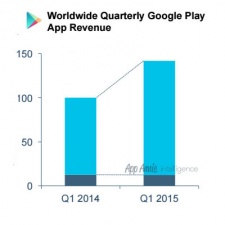 Games revenue generated on the Google Play store has skyrocketed by 50 percent, according to a new report from the data gurus at App Annie.

Ahead of Google I/O, the analytics firm has released a report charting Google Play’s growth from Q1 2014 to the same time in 2015.

It found that the uptick in revenue was largely due to growth in established markets such as US, South Korea and Japan.

However, quarterly app downloads on the store also grew by 30 percent - powered, interestingly, by emerging markets.

Brazil is the fastest growing country on Google Play in terms of app downloads, but Japan and South Korea rule the roost in terms of players spending the most time in game – thus paving the way for in-app purchases.

In terms of which games performed the best across the global charts, it'll come as no surprise that both Candy Crush and Clash of Clans appear in the top 10 of all 6 countries (US, UK, Germany, Japan, South Korea and India.)