What makes Pokémon such a monster game? 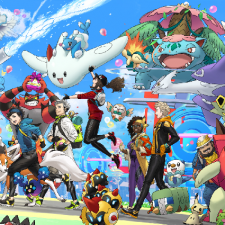 Nintendo released Pokémon Scarlet and Violet on November 18, and the games quickly went on to sell ten million combined units in just three days, making them the fastest-selling games in the franchise so far, but what’s driven the franchise’s success?

Pokémon sits in a happy place in terms of both brand appeal and nostalgia. The cast of colourful characters and an ever-expanding roster of collectible Pokémon mean that the series maintains its relevance with new audiences, while players who grew up on the franchise are consistently given a reason to play.

The game has also successfully leveraged its success by breaking out of its routes on game boy. The franchise has birthed a massively successful anime series, a whopping 24 movies, manga, and become a merchandising phenomenon.

The franchise has also seen success in leveraging the IP into the mobile space, which allows the franchise to shake up the gameplay. Pokémon Masters EX lets people take place in real-time 3V3 battles, Pokémon Unite places the characters into a MOBA arena, and Pokémon Go has become one of the most successful mobile games of all time by letting new fans and veterans alike live out their dreams of becoming Pokémon masters while exploring the world.

The strength of the franchise comes from its versatility, and the overall simplicity of the concept. The series has been translated into real-time strategy titles, fighting games, and even detective stories. The mainline franchise has achieved a rich competitive scene with tournaments held all over the world, and fans of the franchise have even created numerous fan games such as Pokémon Reborn and Pokémon Ash Gray.

Other franchises have tried, and failed, to emulate Pokémon’s success, and a part of the problem is often specificity. The core idea of the Pokémon world – that the world is inhabited by friendly monsters who fight alongside their human partners – lends itself well to all manner of stories. On mobile devices alone there are numerous games from a variety of genres, while other franchises often struggle.

Even outside of games, the franchise continues to succeed, often in unexpected ways. Detective Pikachu, based on a spin-off game, has gone on to become the second most successful video game movie of all time with over $433 million in gross revenue worldwide – more than $250 million more than the next most successful film in the franchise, Pokemon: The First Movie.

Where will the franchise go in the future? Well, while we can expect more games within the franchise to follow the established formula, it’s ripe for exploration in numerous forms and genres, and can continue to rely both on the nostalgia of existing players and the revenue potential of attracting new pokemon trainers.