January 21st, 2010 - 10:59pm
By Keith Andrew
Control of the worldwide mobile internet market would appear to be a two horse race, AdMob's monthly report for December concluding that Apple and Nokia account for more than half of the worldwide market between them.

December 2009's AdMob Mobile Metrics Report breaks down mobile market share by region, detailing both the top handsets and operating systems according to AdMob's own statistics.

Rather than using sales figures, the company stores and analyses handset and operator data from every ad request in its network.

For this reason, it's a good tracker of the devices used by people who downloading mobile apps and using the mobile internet.

Apple naturally dominates a large portion of the report's findings, AdMob claiming the company currently controls 40 percent of the market in North America.

iPhone also holds the lead in Western Europe, iPhone and iPod touch combined generating "more than half of total requests from the region, at the expense of Nokia, Samsung, and Sony Ericsson."

Its success in these two key regions appears to be the main force behind Apple's worldwide surge. AdMob's worldwide data shows Apple pulling ahead of the competition, the report's figures suggesting Apple has a market leading 36 percent share to Nokia's 18 percent. 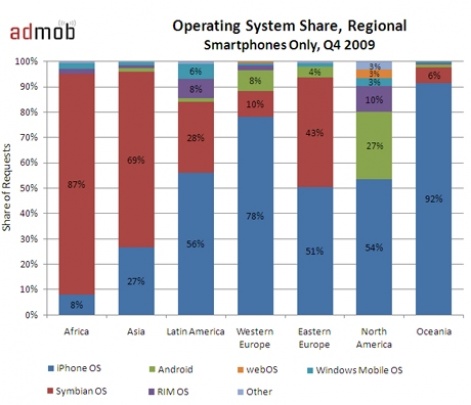 Nokia, however, is still market leader in a number of territories according to December's report, its share remaining steady in both Africa and Asia respectively. Indeed, the Asian market is currently one of the company's strongest, the report claiming 53 percent of all requests in Q4 2009 came from Nokia handsets.

Android's increased penetration in both North America and Western Europe is the other main point of note, the OS is gaining vital ground in the west. As a result, AdMob also claims that Motorola's Droid is the second most popular smartphone handset in North America, behind iPhone.

A full account of the report's findings, which is the latest in a series extending back to January 2008, can be downloaded for free in PDF form from AdMob's website.