December 1st, 2010 - 02:28pm
By Jon Jordan, Contributing Editor
Following on from yesterday's heated debate about the size of mobile games market, EA has released some figures about how large it thinks the market is.

Part of a talk from CFO Eric Brown at the Credit Suisse annual technology conference, the company estimated the worldwide market in 2010 as being worth $3.4 billion, with Asia accounting for half of total revenue.

The other half is split between the Americans and Europe, with EA saying 41 percent of this is the shrinking feature phone Java and Brew market, while the remaining 59 percent is from smartphone sales. 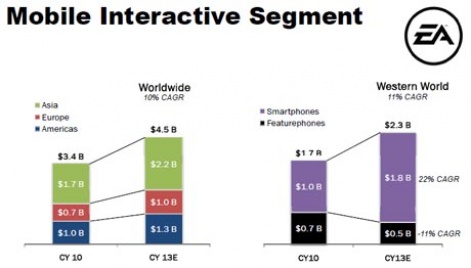 Into the crystal ball

In terms of future growth, EA expects the total mobile games market to be worth $4.5 billion in 2013, with Europe the fastest growing sector. Overall the Compound Annual Growth Rate (CAGR) of the market will be 10 percent.

Breaking out the performance of the western market, EA expects the smartphone sector to grow strongly at 22 percent CAGR, while feature phones will drop by 11 percent.

Here's my graph of what all these predictions look like. 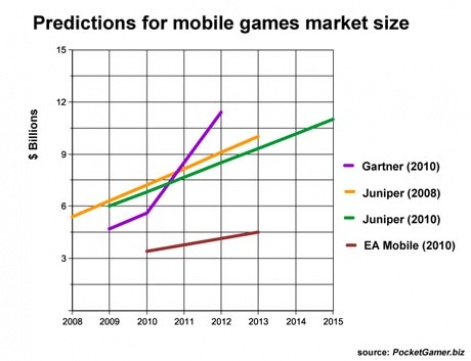