Angry Birds comes out as 2010's most popular game

January 10th, 2011 - 12:02pm
By Keith Andrew
If 2010 was the year when sales of apps exploded, then analytics firm Distimo's numbers suggest it was also the year apps got a whole lot cheaper  at least on the surface.

Not only does Distimo's full year report for 2010 detail the prevalence of free apps when it comes to sheer download numbers  the top 300 free apps in the US downloaded 3 million times a day on average, compared to 350,000 downloads for paid apps  but it also casts some light on the race to the bottom for the titles that do charge.

No pay to play

In general, paid apps saw their collective average price drop in all major mobile marketplaces across the course of the year, with Distimo's figures citing the Ovi Store as enduring the greatest price slide  the average price of the top 100 apps down 61 percent, compared to iPhone's 19 percent drop.

The price of paid apps on the Android Market actually rose slightly however. 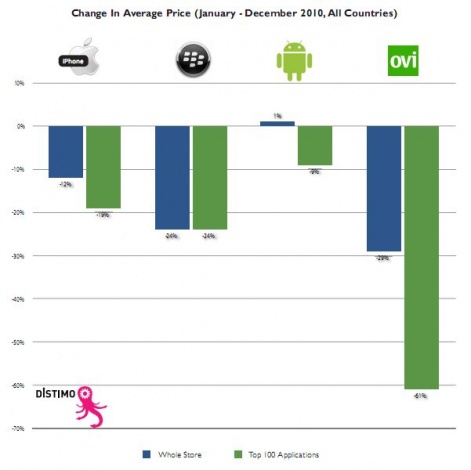 But while free apps and cheaper paid apps appear to have dominated the year, Distimo also notes that in-app purchases are proving especially popular.

Of the highest grossing apps on iPhone in December, 49 percent of revenue is generated from in app purchases, up from 36 percent in June.

Even on iPad, where in-app purchases are far less commonplace, their share of the pie more than doubled in the last six month of the year, making up 29 percent of revenue generated by the top grossing apps. 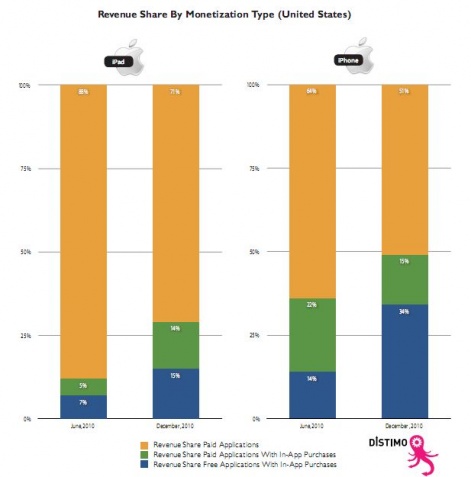 From a gaming perspective, however, the paid model still appears to be the most popular  evidence of which comes from the fact that far more games feature in the top 10 most popular paid apps on each marketplace than they do the equivalent free app countdowns.

Rovio's Angry Birds was, predictably, the most popular game across the course of the year, featuring somewhere in the top five of every countdown where it is eligible  six appearances in all, most notably topping iPhone's paid chart.

However, while yet to launch on Windows Phone 7, Distimo notes the platform already comes with a distinct focus on games. Games take up every single spot in the platform's top 10 most popular paid apps, EA coming out on top with four games in all.