Mobile games make up 12% of daily play time in US, as big as MMOs claims Newzoo

June 6th, 2011 - 04:08pm
By Keith Andrew
It might not seem an impressive stat upon first glance, but given the relative length of the majority of mobile games, the suggestion they account for as much play time as MMOs is nothing to be sniffed at.

That's the conclusion made by Newzoo from stats drawn from its national gamers survey, pooling data from players across the US.

Competiting with the big boys

Numbers suggest that, when it comes to dominating our time, mobile games are still outperformed by those on PC/Mac (boxed and downloaded games combined) and console.

However, with a 12 percent share of our game time across the course of the day, time spent on mobile games is now equivalent to that spent on MMOs. 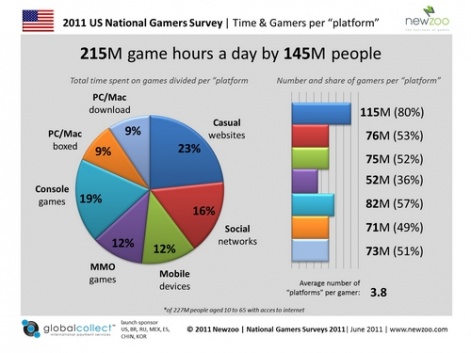 Such 'traditional' platforms are no longer the dominant force, however.

Playing games across the web - via social networks or 'casual websites' - is now the most popular medium, accounting for 39 percent of the 215 million hours of play time 145 million people amass every day.