November 10th, 2011 - 11:10am
By Keith Andrew
Once only a theory, there's now little doubt that the rise of smartphones  or, more specifically, iOS and Android  is having a negative impact on the health of more traditional portable platforms.

Specifically, figures sourced from analytics firm Flurry illustrates revenue generated on Nintendo DS falling through the floor during the course of the last two years.

The firm's US numbers suggest that Nintendo's once dominant handheld now accounts for little over a third of the $3.3 billion revenue the market as a whole generates each year.

That's down from the 70 percent share Nintendo boasted in 2009, with Apple and Google's smartphone platforms jumping from 19 percent to a market leading 58 percent share during the same period. 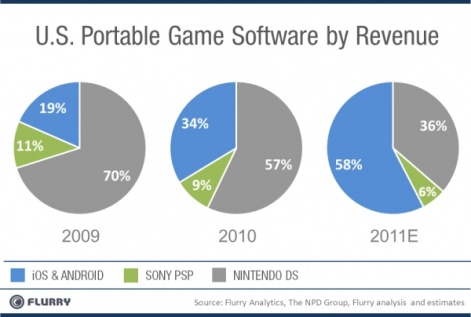 Unsurprisingly, Farago concludes the prevalence of 99c and free titles on smartphones is changing consumer perception of the value of games, making the "days of paying $25 or more for a cartridge at retail may soon end".

"Further, the installed base of iOS and Android devices has not only reached critical mass, but also continues to grow at unprecedented rates," he concludes.

"In their latest public statements regarding installed base, Apple and Google reported a total of 250 million iOS devices and 190 million Android devices activated, respectively."

But while iOS and Android are stealing the headlines as a result, it's Nintendo that Farago believes has the big decision to make - a decision akin to the 'burning platform' Nokia CEO Stephen Elop said the Finnish firm found itself on at the start of 2011.

"Combined with slumping Wii sales, Nintendo is indeed struggling, even with its powerful stable of original IP led by Mario Brothers, and despite the fact that the exchange rate between the Japanese Yen and U.S. dollar is currently in its favour," states Flurry's VP of marketing.

Farago believes the forthcoming 'battle for the living room'  with recent entries by both Apple and Google into the TV category - will also add to the firm's woe.

"Beyond 2011, if Nintendo continues to face financial hardship, it may be forced to consider difficult choices such as divesting its hardware business and distributing its content, for the first time, across non-proprietary platforms.

"In our last review of the portable game category, comparing 2009 to 2010 revenue, we believed Mario was already 'standing on a burning platform.'

"With 2011 numbers now added to the story, it appears that the inferno has intensified, and that Nintendo may truly face a Nokia-like decision to jump or perish in the flames of its own burning platform."