January 17th, 2012 - 06:54pm
By Keith Andrew
If ustwo's experience is anything to go by, developers don't need research reports to illustrate the strength of the freemium model - they're learning through experience.

The question of just how big the free-to-play market can grow in the coming years, however, is a much more elusive one.

IHS Screen Digest, like most other market analysts, has come to the conclusion the only way is up, projecting in-app purchases (IAPs) to generate $5.6 billion in revenue in 2015.

That's equivalent to 64 percent of projected total market revenue, the firm claims, and up more than fivefold from the $970 million generated in 2011. 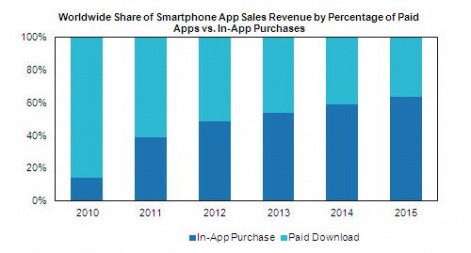 "In 2012, it will become increasingly difficult for app stores and developers to justify charging an upfront fee for their products when faced with competition from a plethora of free content.

"Instead, the apps industry must fully embrace the freemium model and monetise content through in-app purchases."

IHS Screen Digest claims free titles represented 45 percent of the top grossing apps on the US App Store during Q3 2011, as well as 31 percent of the highest-earning apps on Android Market during the same period.

"Games pioneered the in-app business model. Now the approach has proven so successful, companies building other types of smartphone app must adopt this strategy if they are to maximise their mobile app revenues," added Kent.

Currently, virtual currencies are the most popular IAP, making up 63 percent of all such purchases on iPhone during Q3 2011.

Paying to unlock specific game functions or features is the next most popular IAP, accounting for 22 percent across the same period.

Interestingly, non-game IAPs are currently proving far less popular, with paying for additional media content account for 2 percent of purchases in the US, and 0 percent in the UK.

Likewise, time-limited subscriptions currently account for 5 percent of IAPs in the UK.