March 30th, 2012 - 07:29pm
By Keith Andrew
Android might be Google's platform, but its open nature means the firm can easily be outdone in areas where it's not a specialist.

Indeed, based on numbers sourced across a 45 day period in January and February, Flurry suggests apps on Amazon's Appstore generate almost four times as much revenue as those on Google's marketplace, formally known as Android Market.

The firm monitored the same set of apps across Apple's App Store, Google Play and Amazon's Appstore for Android, with the top performing platform  the App Store  given a base rate of 100 percent revenue.

On those terms, the 45 day study found apps on Amazon's store on average generate 89 percent of the revenue they do on iOS.

This is well ahead of the 23 percent figure recorded for Google Play. 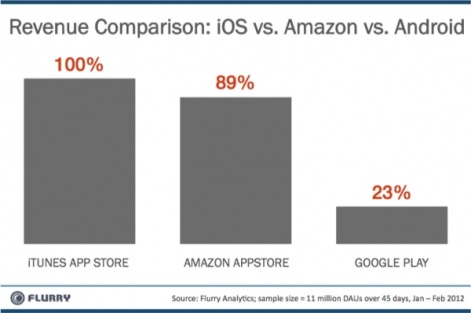 "Amazon, who forked Android in order to put consumers into their own shopping experience on Kindle Fire, is showing its commerce strength, already delivering more than three times the revenue in its app store compared to what Google delivers developers," details Flurry's Farago on the figures in a blog entry.

The answer behind this apparent disparity, Farago claims, can be found in the history of the three companies themselves.

"Apple runs the highest revenue-per-square foot generating retail store on the planet as well as the successful iTunes store," he asuggests.

"Amazon, who invented one click-purchase, perfected online shopping with data, efficiency and customer service.  Googles strength is in scalable online search engine and advertising technology. Running a store, retail or digital, has not been their traditional core competency."

Flurry believes an increasing number of Android developers will now move towards Amazon's platform, despite the fact that it's still not available outside the US.

Conversely, it advises Google to "reduce commerce friction to keep growing app developer support" moving forward, with Amazon having effectively schooled Google on digital retail in its own back yard.

"From an ecoystem perspective, the emergence of Amazon as an additional distribution channel appears to be a boon for developers," concludes Farago.