June 22nd, 2012 - 11:32am
By Keith Andrew
A study looking at developer economics has branded tablets as the most potent platform for scores of mobile studios, with more than half of all those surveyed claiming they are now targeting the devices.

The research, published by VisionMobile, concludes that iOS developers are unsurprisingly the most likely to make tablets a priority, with iPad no doubt the main system in their sights.

When it comes to developer mindshare  a measure of studios working on each platform, irrespective of the developer's 'primary' OS  Apple is no longer top dog, however.

VisionMobile claims 76 percent of developers are working with Android, ahead of iOS on 66 percent.

The firm claims Windows Phone is also gaining momentum, branding the platform "the new cool" with 56 percent of developers planning to work on Microsoft's OS. 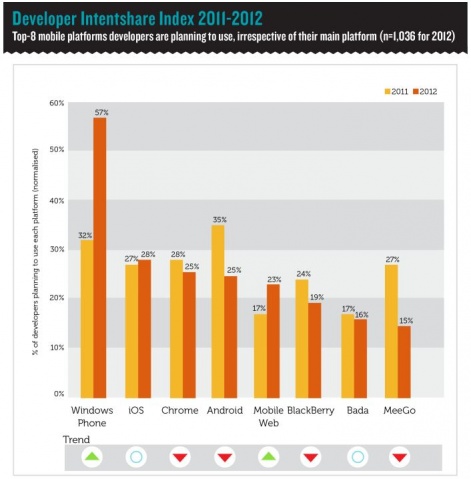 Older, legacy platforms such as BlackBerry and Brew, as well as relative newcomer bada, are falling away, however, with VisionMobile stating developers believe all three are failing to compete in terms of user reach.

That's despite BlackBerry coming out on top in terms of average revenue generated per developer, ahead of iOS.

It's not just some of the platforms that are suffering, however.

VisionMobile reports one in three developers live below the "app poverty line" - apps have a 35 percent chance of generating between $1 and $500 post launch, with the average revenue range coming in at between $1,200 and $3,900. 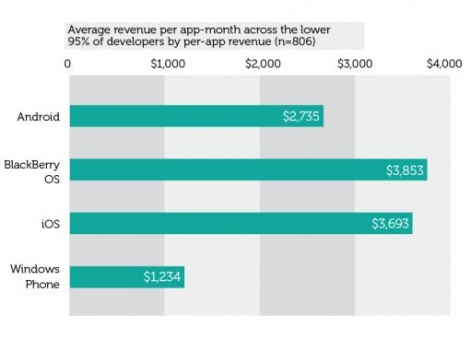 The report can be downloaded in full from VisionMobile's website.