July 16th, 2012 - 09:31am
By Jon Jordan, Contributing Editor
In keeping with many other analytics and monetisation mobile platforms, app and game distribution outfit Flexion has committed to regularly release some of its market figures.

It's now covering the Q2 2012 report in its Apps Market Report.

This reveals that in the three months ending June 2012, 4.54 million (around $5.6 million) was spent on mobile apps via its Android and Java wrapper Flexion platform.

Europe was Flexion's largest single region, with sales of 3 million (around $3.7 million). But the biggest growth region was Latin America, and the fastest growing countries were Vietnam, South Africa, Brazil and Indonesia.

Brazil was also the best-performing country by consumer spend.

These converted to 2.8 million premium transactions - up 8 percent quarter-on-quarter - at a conversion rate of 10.2 percent. 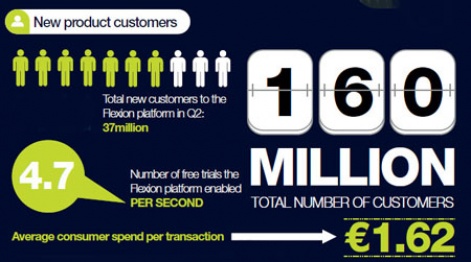 The most popular game during the period was Doodle Jump Deluxe, which is published by Realnetwork's division GameHouse.

Other customers for the platform include EA, Sony Mobile, Digital Chocolate, Connect2Media and Orange

You can find more details here (PDF) and find out more about Flexion's business via its website.