How science and exploration lead to an indie sensation 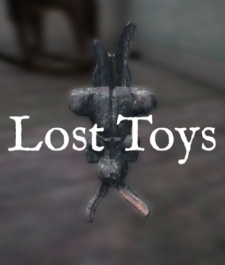 Danielle Swank, one half of Barking Mouse Studios, is remarkably grounded despite the breakout success of the bedroom studio project Lost Toys.

"Being a tiny indie studio certainly isn't the unique experience it was several years ago, so it's not newsworthy," Swank says plainly when discussing the marketing for the melancholy mobile puzzler.

"However, it's never been easier to make a game, and game makers aren't limited by their size or budget anymore."

Instead, they're limited by their passion, ambition, and ideas.

Thankfully Swank and her partner Jim Fleming have these three traits in spades.

It all began with love. And Skyrim.

Lost Toys is an ambient puzzler that confronts players with a set of increasingly complex wooden block puzzles that they must manipulate, slide, and rotate back to their original form.

There's no plot, story, or narrative at work in the game - it's just the player, the puzzles, and what they choose to think about as strains of Peter Rudenko's somber piano music float in from the background.

For such a maudlin setting, it might sound strange to learn that it was love that motivated Swank and Fleming to get into game design in the first place.

"Jim and I wanted to make something that we were passionate about," she tells us. "We've made a bunch of different web-apps and other software, but nothing that we really loved. We loved making Lost Toys. It's the best thing we've ever done."

The idea for the game came to the pair following a trip to a local science museum, and after inspiration struck it was set to be a single object rotational puzzle game like Shadow Move.

But they wanted more.

"We didn't think rotating one piece was complex enough to sustain a game, so we decided to scramble the whole object," Swank continues.

As for how they arrived on toys, that inspiration came from random brainstorming.

"Jim and I were on a car trip and tossing around ideas, all of a sudden Jim blurts out 'Creepy toys!' I knew exactly what he was talking about, and from there the game sprung fully formed into our heads."

How many engineers does it take...

Of course, critics have been quick to compare Lost Toys to Fireproof's award winning The Room and, while Swank and Fleming are "honoured by the comparison", she notes that The Room came out after they had already settled on their art style.

"The lock-picking mini-game in Skyrim was actually one of our primary game influences," Swank continues.

"I love how tactile it is, and how much emotion is stuffed into a simple little rotation game."

Indeed, both Fleming and Swank have engineering backgrounds, but despite this technical grounding they still found the development of Lost Toys to be "demoralising" at times.

"The mechanic was incredibly difficult to get right. Jim and I knew from the beginning how we wanted it to feel and work, but it took over six months on non-stop slog to get it working."

The only thing that saved Fleming and Swank during these dark moments was, fittingly, their partnership.

"I think the only thing that got us through is that Jim and I tend to freak out at different times, so we were able to switch-off on the moral support duties."

An early render of one of the puzzles

Looking beyond the mechanics, one question the studio has been repeated asked is why it chose to launch on iOS exclusively before Android. The answer here is a simple matter of scope.

"We've never launched a game before, so we decided to take it one platform at a time," notes Swank. "Now that it's out on iOS we'll start planning an Android release in the next few months."

Another question the pair have faced is why they chose the premium pricepoint of $3.99/£2.49. Did they consider any alternative pricing models?

"We did," Swank replies.

One thing that is clear, however, is that Lost Toys was never meant to be a breakout, free-to-play retirement ticket.

"Lost Toys wasn't designed to be a free-to-play game and trying to shoehorn that kind of monetisation strategy wouldn't have worked out."

Not quite time to put away the toys

"People are playing our game and people are writing about our game. It's an incredible feeling. I'm not sure what more we could have asked for,"

Still, despite the initial success, Swank and Fleming aren't quite done with Lost Toys yet.

"Making Lost Toys has been one big long learning process. We're going to release a zen mode, without turn limits, in the next week or so because a few people have commented about how they don't like the turn limits.

"I also don't consider Lost Toys a finished work yet, it's just a launched work."

There's more coming, too, but it might take a while before the right ideas materialise.

"[There'll be] more games definitely, but I don't know what they're going to be yet. We'll know we've got the right next idea when we get so excited about it that we don't want to work on anything else."

Lost Toys is available now for iPhone and iPad on the App Store.