Digging deep down: It's time to introduce a sense of balance to the sexism debate

Why jumping the gun does more harm than good 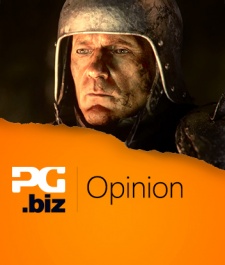 When Capcom revealed that its upcoming PS4 exclusive, Deep Down, wouldn't have a playable female character, I wasn't sure how I felt.

What I knew almost immediately, however, is how the industry expected me to feel. A quick glance in the direction of Twitter told me that the people of the games industry wanted me to react in a very specific way.

Unless I wanted to be tarred, feathered, and labelled a misogynistic arsehole who's just another advocate of patriarchy, I should be damning the sexist pigs developing Deep Down for actively discriminating against women, and for supporting those narrow minded fools who don't believe that the games industry needs more female protagonists.

Why? Largely because, at the time, we didn't have all of the facts, and apart from a few vague statements bandied around by various news outlets, no-one in the industry really knew why Deep Down wouldn't have a playable female character.

Honestly though, I also wasn't convinced that not having a playable female character in a game made it, or those working on it, inherently sexist.

Should I be condemning a development team, should I be beating them to death with my words, because they opted to have a male lead, rather than a female one? In my view, that polarised take on the issue isn't healthy and doesn't aid the debate one iota.

Of course, critics will no doubt suggest that the fact that I'm not sure whether or not having a playable female character in a game is inherently sexist, and is something worth eradicating and condemning, makes me sexist and part of the problem.

This kind of black-or-white approach to an issue isn't the sole domain of the sexism debate, either.

Whether you're talking Doritosgate, Microsoft's own accusations of sexism or any other major issue that has hit this industry at any point during the last few years, the consensus on social media appears to be "if you're not with us, you're against us".

I've read a few articles which seem to suggest that those who don't necessarily think that the Deep Down issue is that big of a deal are ignorant morons, whose opinion has no place in the debate.

VG247 addressed the Deep Down issue in an editorial - penned while writer Brenna Hillier was "pretty fucking angry" and, as hindsight has quickly suggested, lacking some pretty key facts - where the site stated that "if you honestly cant understand it, go forth and educate yourself".

That's the kind of stance that alienates people from the debate rather than engages them.

With comments switched off  perhaps, understandably, to shield the site from a wave of misogyny that history suggests tends to greet such editorials  Hillier's piece attempted to completely close down the argument.

Without wanting to put words in her mouth, the thought the piece left me with was, if you disagree that Deep Down is the latest bastion of sexism, you're ignorant of the facts.

"If you feel that gaming is the one thing remaining to men and girls should stop spoiling it with political correctness, then please go boil your head because I see no point in debating with people incapable of basic logic and lacking humanity," Hillier added.

What made Hillier's piece so frustrating is that much of it held weight. No one doubts that sexism remains an issue in this industry, but the article picked the wrong game to pin the blame on, and attempted to shut out anyone who didn't agree.

If we're ever to make progress fighting sexism in the games industry  and, for that matter, homophobia and racism  we're going to have to open up the floor and fully evaluate why it's yet to be eradicated.

We're also going to have to acknowledge the facts, even if on the surface they appear to weaken our position.

I've dropped this point in a few times now, so allow me to clarify why checking you have all the information available is so very important: A day after Brenna Hillier's article was published, Capcom responded to the controversy by clarifying its position to Eurogamer, giving a statement that undermined VG247's argument.

"I was informed by a representative of one of our overseas branches that an article containing misleading information regarding Deep Down has been recently circulating and drawing some attention," producer Kazunori Sugiur explained.

"This article makes the claim that the game has 12 playable characters, all of whom are male. As producer in charge of this project, I would like to respond and clarify.

"While the main character of Deep Down is indeed male, he is the only playable character in the game. The story focuses on him and a group of allies known as the Ravens."

Now, it could easily be argued that, while Hillier's take on Deep Down appear to be wide of the mark, the argument she presented still stands: there's only one playable character, and he's still male. That's sexist, right?

Likewise, I didn't have a problem playing Mirror's Edge, Bayonetta, Portal and Portal 2, Tomb Raider, or any of the Metroid games, despite the fact that they all feature female protagonists.

No one is suggesting that these games address the balance  there are still far more games with male leads than there are female.

More seriously, a developer shouldn't be harassed or bullied into including female characters in their games.

We want to get to the stage where the games industry actively wants to tell stories from a female point of view  not one forced into doing it for fear of persecution from the games press and public alike.

There's no doubt women remain poorly represented in games, despite the fact that pretty much every indicator on the planet suggests more and more gamers are female. But firing off knee-jerk editorials that attempt to hang the entire debate on one game will earn us nothing (other from a fair few thousand page views).

Ousting sexism from the games industry once and for all is going to require a far broader shift in attitudes than can ever be achieved by an opinion piece like this or any other.

We'll get there, but I can't remember a time when suggesting people go "boil their heads" aided any cause.

Reply
jon jordan
As with the number of public toilets, I believe that - in general - the ratio of playable to female to male characters should be 2:1.