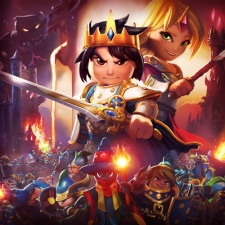 As with many F2P mobile game startups, it took German developer flaregames some time to get up-to-speed.

One original stillborn concept it played around with was The Sims with location-based elements, but it wasn't long before it was building on its founders' expertise,and finding its feet making mobile strategy games.

Its first big success was tower defence hybrid Royal Revolt!,  and backed with 8 million euros in VC funding, it moved onto to finesse the concept with multiplayer-only title Royal Revolt 2 - a game that flaregames' CEO Klass Kersting reveals generated $1.75 million within in first month of release.

We spoke to Klaas, who was previously the co-founder of Gameforge, and Pete Walentin, head of studio at flaregames Frankfurt, to find out more about the game's development, launch and operations to-date.

Pocket Gamer: Can you give us some background about flaregames?

The founders of the company are industry veterans: Georg [Broxtermann] led the games business of ProSieben Sat.1; Matthias [Schindler] shipped about 50 retail and browser games for various companies; I founded Gameforge, a leader in the MMO space.

The original Royal Revolt  seemed like a relatively successful game, so why did you decide to make a sequel rather than continuing to push the original with upgrades?

The game recouped its development costs within the first month, generating $1.75 million.

Also, we wanted to target a slightly more mature audience to extend the IP.

Klaas: And we, as a company, had learned much since Royal Revolt!  and longed for a fresh start.

When you're making a sequel, you have to keep some parts the same as well as adding new features so how did you try to balance this?

Pete: The main mechanic - the tower attack - stayed the same, providing a solid, proven gameplay core - a foundation to build on, so to speak.

But we found that battles took too long in Royal Revolt!,  up to 20 minutes, so we aimed at shorter game loops. That fit in nicely with our approach to have the players design their own defense.

The whole castle thing, on the other hand, was a whole new level; an extra layer designed to make the game deeper and more interesting in the long term.

How big a decision was it to completely remove the single-player campaign for Royal Revolt 2?

Pete: We discussed that a lot, it was a tough decision. But a campaign like that of Royal Revolt!  just didn't quite fit in.

But, right now, we are building a single-player campaign for Royal Revolt 2  that will be tailored to suit the gameplay. It'll be introduced in a regular update somewhere in the near future.

Did you consider calling the game something else so as not to confuse people who hadn't played the first game?

Klaas: Yes, but the upsides of an established brand name weighted it off.

For an action TD game, the art style is quite cute. Why did you go for this as opposed to a more traditional fantasy style?

Pete: We were aiming for a look that appeals to mid-core and core gamers alike. It should look cute, but a sharp, reduced flavor of cute, not fluffy bunny cute: cute with an edge to it, if you will.

I think we achieved that as the game was well received all over the world, with some of the most devoted fans living in Thailand.

The base in Royal Revolt 2  is fixed in terms of building placement. Why did you decide not to allow base customisation?

Pete: That was on our list, certainly. But it was thrown out as we were prioritizing features when the launch drew nearer.

Pete: About twelve months. We used our own technology and our own tools. We have a robust tool set that we used to develop console and PC games - and adapted it for mobile platforms during the development of Royal Revolt!.

How did you approach soft launch and did you learn anything surprising from this period?

Klaas: We reserved enough time for soft launch and tweaked and balanced and tweaked again. We reworked the tutorial a few times but there was nothing surprising.

In terms of the game economy, you have a traditional hard currency and 2 soft currencies, but the food currency seems rather underused in that you rarely seem to run out of it. Was that a conscious decision?

Pete: We want players to play the game and not run constantly against paywalls.

But you're right that food is underused. We are working on features to use it better. And, we added a second hard currency together with the hero item shop.

What's the thinking behind that?

Klaas: We introduced this currency together with the legendary hero items. We wanted to reward loyal players with unique items.

Another interesting part of the game is that you give the player a lot of gems as well allowing them to use gems frequently in gameplay - such as resurrection or special spells. Why did you decide to take this approach?

Pete: Again, we want players to play. We have a beautiful game and rock solid gameplay - we wanted to give the player time to experience it before being asked for money.

Royal Revolt 2  does a lot of automatic retail bundling. How do you trigger these and how pleased have you been with the uptake?

Klaas: Depending on the progress of the player, we determine which items he needs the most and present those to him in a bundle.

The game creates dozens of variants on the fly, responding to the individual game style. It works great, it converts well and the majority of players love it.

A recent update has added more items for the playable character. Was this always planned or a result of player feedback? Should we expect more customisation options in future?

Klaas: This was always planned, but also many users asked for it, so player response is extremely positive.

Pete: We have more features coming, some of them customization options. Wait for it.

I've been playing the game since launch and am now stuck in what I call mid-range grind, in which I have to attack a lot to gain enough resources to update anything. Are you concerned that the gameplay becomes somewhat repetitive and boring at this stage of the game?

Klaas: We have some slight problems with the mid-game. We're working on features to fix that.

But please note, the game is only a few months old and we're hoping to run it for years. We have a grand list of things to add, to optimize, to make better. The next big thing is a huge PvE element - bringing new troops.

You've released on iOS and Android. What similarities and difference do you see between their audiences?

Klass: On iOS, the Life Time Value of the users is highest, especially on iPad. On Android, user acquisition costs are lower.

But you're missing one platform: We have released the game on iOS, Android and Windows Phone. The port to Window Phone worked great for us, for Royal Revolt!  as well as for Royal Revolt 2.

How pleased are you with the game's performance to-date? Can you reveal any figures?

Klaas: There's always room for improvement and we're working on features to boost performance further. But the game is successful and we're happy.

The game recouped its development costs within the first month, generating $1.75 million in revenue in four weeks.

What's next for flaregames and Royal Revolt 2?

Klaas: We've just closed a Series B financing round and have a number of cash flow positive games in the market: We're ready to take the next step.

We're working on half a dozen games in Karlsruhe and Frankfurt right now and will soon announce more exciting stuff.

Thanks to Klaas and Pete for their time

You can download the game from the Apple App Store, Google Play store, and  Windows Phone store.