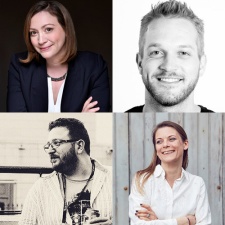 This article was originally published on our sister-site PCGamesInsider.biz.

Earlier this year, we sat down with a variety of studios in the Brighton games scene to take the pulse for this important games hub, featuring indie studios Paper Seven and Dream Harvest, global giant Hi-Rez and PR and data firm ICO Partners.

Below we've written up their responses about just what's going on in Brighton, from what it's like to set up a studio, the challenges and opportunities local companies face, and what the future holds for this games hub.

What changes has the Brighton games scene experienced in the last few years?

Stephan Meijerhof, senior PR manager, ICO Partners (lead image, top right): There hasn't been a massive change in the last couple of years but I do feel that the scene feels more populated by indies.

It's so easy right now that anyone can do it. But that means that there's a lot of people underground who you just don't see. Offices are popping up for developers and publishers - it feels really cool. Brighton doesn't have the massive monolith of an EA like Guildford, and maybe for the better.

Justin French, founder and CEO Dream Harvest (lead image, bottom left): There are a lot of solo devs who then freelance for bigger companies. I know at least eight or nine who are working on really interesting projects in their spare time but working full time in another studio.

What advantages are there to setting up a video games company in Brighton?

Veronique Lallie, global VP of marketing, Hi-Rez (lead image, top left): it's a very vibrant place. One of the reasons we decided to open our European headquarters here is the multiculturism here. In terms of talent, it's a very attractive place. We opened this office before Brexit. it also helps that many of the companies we work with - like Ico Partners - are also based here.

Guy: As a city, it's very attractive to people relocating. For people who are already based here, it's been a long-standing hub. I've worked in studios here since 2005 and it was already a hub for several years before that in the old days of NCSoft and Climax. It's got a lot of history. You have the resident talent and then you have talent that's prepared to take a chance and relocate here.

There's the upside of being close to London with the transport links, but the downside is that it's quite expensive to live here so salaries have to be more competitive than other areas of the country like Leamington and Guilford. The University of Sussex is a really good university - we've seen that in terms of its talent base that is coming out from those causes.

French: It feels like a real community here. There's a really nice mix of indie and triple-A studios, as well as service providers - there's everything you could ever want here. There is a massive talent pool here and people are willing to move down to Brighton. It's lovely here. It's a really, really nice place. Very creative.

Meijerhof: Attracting talent to Brighton cool - it's nice to show people around. Locationwise, it's great being so close to Gatwick and London, too. What we sometimes notice is that London is the big city with huge PR agencies, studios and publishers and the salaries are much higher there.

What we've seen is it's sometimes a bit dangerous - people would like to live in London but want to work in Brighton. We can't match the salaries that London has, but the cost of living is much higher there. The other issue is Brexit. Before that, we had no trouble attracting talent. Brighton is a lovely, quirky place.

What challenges are facing the region?

Guy: One of the things that has frustrated me in the past is that you'll often get put into the south-east region for funding. Because that includes London, you won't get as many regional funding opportunities. The South East is often open to funding for companies outside of the South East which makes no sense.

Lallie: Last year I was looking at help from local government and funding sources to host a big esports event where we were flying over 150 people from all over the world. I was looking into help, some form of tax break or whatever, and they told us to go up north and they'd help us out with the venue and so on. There was no budget for Brighton. We ended up doing the event in Spain and it was great.

How is Brexit going to impact the Brighton games scene?

Lallie: It's very hard because there's a lot of unknowns. 70 per cent of my team aren't British here. It's difficult for us to plan on growing. It's concerning for all talent.

Guy: It's frustrating because as an area, the majority wanted to remain. Not only are you dealing with the challenges of recruitment, but you're also sitting there thinking you didn't vote for this.

Meijerhof: We also have a lot of different nationalities and we've been trying for the last year to try to get a German PR executive and it's impossible. We've tried with recruiters, ourselves and we've had people coming back explicitly saying they don't want to come over because of Brexit.

Part of that is because the pound has diminished in value, the salary that we used to offer them is now roughly on par or less than the Euro so we could offer less and be in the same bracket, but with a country like Germany, you just can't do that anymore.

Is the local education infrastructure providing you with the talent that you need?

Lallie: For us, there is a specific area where it is difficult and we have to educate the young talent ourselves, and it's all to do with the streaming and casting roles. Our lead caster spends two hours a day talking to content creators to help them to step up and become more professional. That's an area where the UK education system isn't providing a proper education.

Guy: Our education system doesn't have a good grasp on how games are made, to start with. It's getting better. The way they are made changes so far - even the programming languages you need to know have changed. The UK education system is just really slow to adapt to the industry.

The Government's answer is to have academies, but they bring their own issues. We've had some visits from local schools and the teacher doesn't know C++ or C# or anything about Unity. It's getting better all the time. We've had some really good interns from the University of Sussex on the programming side. Y

ou really need to get into the schools for us to have the graduates and post-grads who have the right skills. Programming games is hard. As a company when hiring, you want someone who is not only a great programmer but also still has an ability to think creatively, work with others, they have to have the right personality as well. I'd love to know if the universities talk to them about that stuff.

French: As an indie studio we want to hire people who are multi-talented - who aren't just programmers but are programmers who can help out with design.

My lead designer and gameplay programmer Milcho Milchev started working with us when he was at Hull University. He's a math prodigy and went to a special maths college in Bulgaria. He was hired by Edge Case right out of university.

My CTO is the same - an amazing graphic and AI programmer who can do 3D modelling.The British education system doesn't deliver those kinds of candidates. That's why my whole team are European.

What is the future looking like for the Brighton games scene?

Lallie: Brexit will define what's going to happen. A lot of us will be damaged by a negative impact. We are already damaged by Brexit. When it comes in, it'll strike everyone in the UK, not just in Brighton. The future is bright for Brighton specifically.

Meijerhof: Brighton and the UK's future is completely tied to Brexit right now. I find it hard to see beyond it. But Brighton will continue to be Brighton - there will be creativity and so on. But we have no idea how many people will leave or stay post-Brexit, with or without a visa, what kind of money we'll be able to offer them?

French: We also don't know how Brexit will affect things like investment and VGTR.

Editor's note: This roundtable discussion was conducted in January at Hi-Rez's Brighton studio.