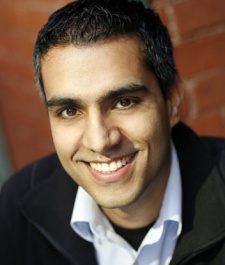 May 3rd, 2012 - 01:46am
By Jon Jordan, Contributing Editor
Given recent events - OMGPOP, Instagram - and now GREE's all-cash $210 million purchase of Funzio, the temptation to use the word 'bubble' is almost overwhelming.

Indeed, Funzio's COO Anil Dharni - now a GREE International SVP - is happy to concede one could be developing.

Just not when it comes to Funzio.

"There are only a handful of companies in this industry that stand out in terms of having repeat hits and doing it profitably," he argues of Funzio's track record.

"Unlike some of the social apps companies, we have real revenue and real users. Our metrics show it."

As chief operating officer, those metrics are what Dharni focuses on, but he's not going to share them.

It's generally assumed Funzio's four free-to-play releases (three on iOS, and one Android port) have done over 20 million downloads. There's never been a sniff about its DAUs or MAUs though.

"Just look at the top grossing charts," Dharni says. "That's the blue chip metric for us."

He also points out that Funzio's focus on what it calls 'mid-core' - male, teen gamers - means that the number of downloads isn't actually a good comparative measure.

"Our users monetise higher than the competition and we have higher retention," he says. "Our games just perform better."

A significant aside is Dharni points to the performance of Funzio's games within the still fast growing iPad market.

"We're very bullish on iPad. Tablets continue to sell well and we expect the Android tablet market to grow too," he says, of a sector that's increasing looking like it's going to replace consoles in terms of gaming time for many young males.

Jetpacks at the ready

As for the future, Funzio is keen to integrate deeply and quickly with GREE.

"The point isn't to be at arms length. We need to know how it succeeds in Japan. We want to share knowledge," Dharni explains. "We want to integrate tightly."

And the combined operation is sizeable.

GREE has 200 staff in San Francisco and continues to hire, while Funzio itself is over 130-strong. That's a lot of social mobile game developers in the Bay Area.

"With GREE, we can blow out the network," Dharni enthuses.

Funzio rumoured to be seeking a $50 million round to compete with Storm8, Kabam, Zynga and GREE