"There's things that I should fix, but I don't want to." 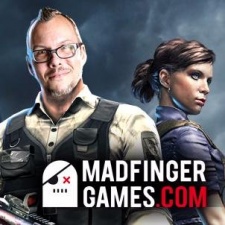 After six years, Czech developer Madfinger Games has certainly proven itself as one of the biggest hitters in the mobile gaming space.

Its portfolio of 9 games - mainly shooters - have received a combined total of 150 million downloads, with over 100,000 years of playtime.

And now, the company is aggressively expanding as it begins work on its next title, which it's remaining tight-lipped about, aside from promising great things.

Part of this expansion included bringing in Miguel Caron, formerly of Funcom and Behaviour Interactive, as Studio Head.

Though, thanks to a series of misunderstandings, it could have easily been someone else.

"Marek (Rabas, CEO of Madfinger) made a mistake with my CV and thought I was too corporate," says Caron.

"He asked the headhunter to have an interview with another candidate who has a very similar name to me."

But that headhunter also made a mistake, and Caron ended up in a Skype call with Rabas after all.

"It was love at first sight," says Caron.

It was love at first sight. Marek was the kind of businessman, entrepreneur, and creator I was looking forward to working with.

"He was really the kind of businessman, entrepreneur, and creator I was looking forward to working with."

But what really drew Caron to Madfinger was simply the pedigree – not only in terms of quality of games, but also their solid financials.

"It's one of the most financially healthy companies I've ever seen," says Caron.

"Money is not an element of decision making when we decide to make a game. The founders will not ship a game because they don't have the budget, they'll make the best game possible."

Caron's main role is to bring more structure to the anti-corporate working culture at Madfinger, to allow for the rapid growth that the company is planning.

"They want us to be known as the best at core gaming for mobile," says Caron, "as well as wanting everyone to work at Madfinger."

But he's also there to be a figurehead for the company, and talk up its successes – something which the company hates doing.

"With all of the interviews I do, I'll get shunned by all the employees afterwards," says Caron.

"With Madfinger specifically, but the Czech people in general, they hate arrogance, and they hate to be bragged about."

"I'm bragging about things they have demonstrated, that they've proven over the last six years."

The reason for the rapid growth is due to the scope of the new game, which is bigger and better than anything Madfinger has produced so far.

There's things that I should fix, but I don't want to, and I shouldn't.

As Caron puts it, "They looked and said, we don't have enough people to maximise the jewel that we've found digging in a mine."

They also couldn't take anyone off other projects, as a sudden interest in the company's games meant teams had to stay on to handle updates, instead of working on new projects.

The main problem, however, is that most of the best Czech developers are already employed, and Rabas is opposed to snapping up talent from local competitors.

"Marek is friends with all the other gaming studios in the Czech Republic," says Caron. "He doesn't want me to steal employees from them."

So instead, the studio is looking to hire internationally, and bring the talent into the country.

"I have a reputation of being followed by my team," says Caron.

"When I left Funcom and went to Behaviour, over 36 employees of mine – who had left the studio, I'm not talking about stealing them – came to join me."

And it's important to Caron that while he's bringing in the talent and putting structures and processes in place, he leaves room for the studio's creativity to flourish.

"There's things that I should fix, but I don't want to, and I shouldn't," he laughs.

We're going to add innovation that has never been done before.

"It's madness that I don't understand. I'm opening the box and looking at it, and things go in all crooked and come out gold."

"The gold machine works…I don't understand what's going on, but I won't touch it."

Whether this approach works for the future project remains to be seen – as well as what exactly that project is.

"It's going to be an FPS," says Caron. "We're going to use things that we've built in the past – we're not going to reinvent the wheel."

More clues can be found in Madfinger's job listings – the company is looking to hire programmers with multiplayer experience, and both character and environment artists for large-scale maps.

"It's still an FPS, but it's an FPS where you can actually immerse yourself," says Caron, before rapidly shutting himself up in case he reveals any more.

So it's full steam ahead at Madfinger as they build the best team it can while working on its most ambitious game to date.

But with an enthusiastic new Studio Head, and an already high-quality team in place, this apparently revolutionary new project is definitely worth keeping an eye on.

You can find out more about the roles Madfinger is recruiting for on its official website.

One year on: Madfinger's Studio Head on its big recruitment drive and sharing profits with the team