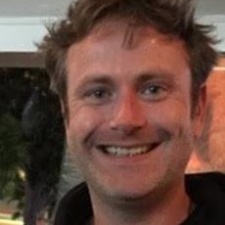 This time, the spotlight is on Bruce Brodie, Senior Producer at Ubisoft subsidiary and Hungry Shark developer Future Games of London.

PocketGamer.biz: Tell us a little about your current role and what it entails?

That means I oversee running a live game with Hungry Shark Evolution, as well as driving a new team creating brand new experiences on the latest technologies with VR and the prototype team - which I can’t talk about as it's top secret!

I started 15 years ago as a Junior Designer and climbed the ladder to Lead Designer.

I realised that I needed to be in production to really put my stamp on a game.


I loved designing games and thinking up crazy ideas, but quickly realised that I needed to be in production to really be able to put my stamp on a game.

I was working on triple-A console games at the time, so I applied for a production role.

The transition was pretty brutal, to be honest, as production covers the whole game development process and suddenly you are dealing with ten times as many people, reports and meetings - and, of course, the entire project responsibility rests on your shoulders.

So it is a lot more pressure but I enjoy the challenge and I still get goosebumps when I see people enjoying the games we make.

No - I actually wanted to be a freestyle skier and ski big mountains for a living.

A spinal injury put paid to that, so I played a lot of games as a kid - which led to my love of the medium.

I did all the standard GCSEs, four A-levels and then hit a brick wall - there were no IT or coding courses when I started, so I ended up doing a BSC in critical design and game theory.

That got my foot in the door for an interview and the rest is history.

These days there are entire university campuses that focus on IT and computer-based learning - we’ve come a hell of a long way in a relative short time frame!

Don’t binge eat burgers and pizza everyday for 12 weeks during crunch time. It takes years to shift that damage after you have shipped!

Be inspired, as well as an inspiration to others.

Jobs in Games: Nordeus' Aleksandar Aleksic on how to get a job as a Producer